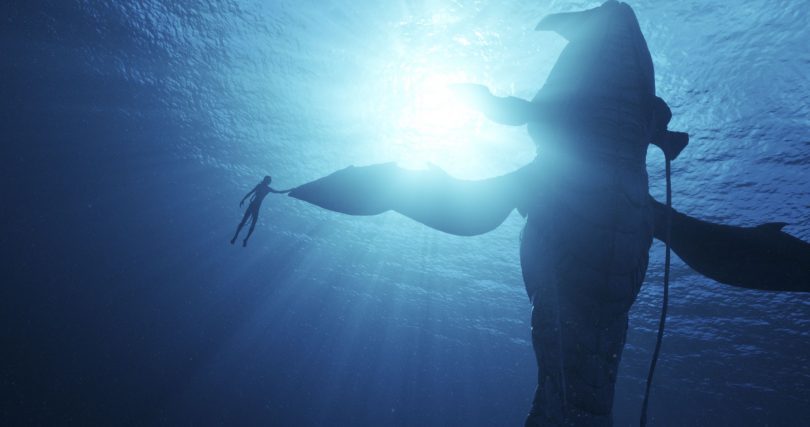 2009’s Avatar was a cinematic experience like no other that paved the way for 3D technology in theaters and would go on to become the highest grossing film of all time with nearly $3 billion at the box office. There is no doubting of James Cameron’s ability to deliver a blockbuster film that dazzles on screen and puts people in seats. Nearly 13 years later and audiences are finally get the sequel, Avatar: The Way of Water, which feels like it has been in production for forever because it has been. Now that the film is finally here, has it been worth the wait? Yes, and no. Avatar: The Way of Water is an absolutely stunning work of art that deserves to be seen on the biggest screen possible. At the same time, it’s a film whose visual effects upstage and overshadow everything else as it recycles many of the same ideas and themes of its predecessor. The return to Pandora is exciting and breathtakingly beautiful, but unlike the film’s running time, its lasting impression is rather short.

Life on Pandora has been flourishing in the decade since the events of Avatar, with Jake Sully living fully as one of the Na’vi and built a family with Neytiri as they raise two sons and two daughters among the Omaticaya tribe, with Jake acting as its chief. Their peace becomes interrupted when the humans return from their banishment off the planet, and this time they are out for revenge against Jake with a resurrected Colonel Miles Quaritch leading the charge now in his own Avatar body. Rather than fight and risk the lives of his family and tribe, Jake decides to flee to the reef tribe of Metkayina and start a new life among the water. But trouble soon follows suit, and Jake must stand up and fight Quaritch if he is to protect the ones he loves.

There is no denying that Avatar: The Way of Water is a gorgeous film to watch. The film relies heavily on performance capture and blends live action with digital animation to deliver stunning visuals that are best viewed on the biggest screen possible. The world and waters of Pandora come alive thanks to the 3D technology as well. Like Avatar, The Way of Water fully utilizes and reinvents the technology to continually push it to its limits. Perhaps too much, if I’m being honest. The visuals are absolutely stunning, but I couldn’t help but think I was watching video game cutscenes most of the time. As gorgeous and detailed everything is, it’s all a bit too hyper realistic and therefore not as immersive as something that is less reliant on CGI. Every frame is too perfect, and my brain knows it. When so much visual effects are involved in every shot, it’s difficult to find anything to ground you to its world. 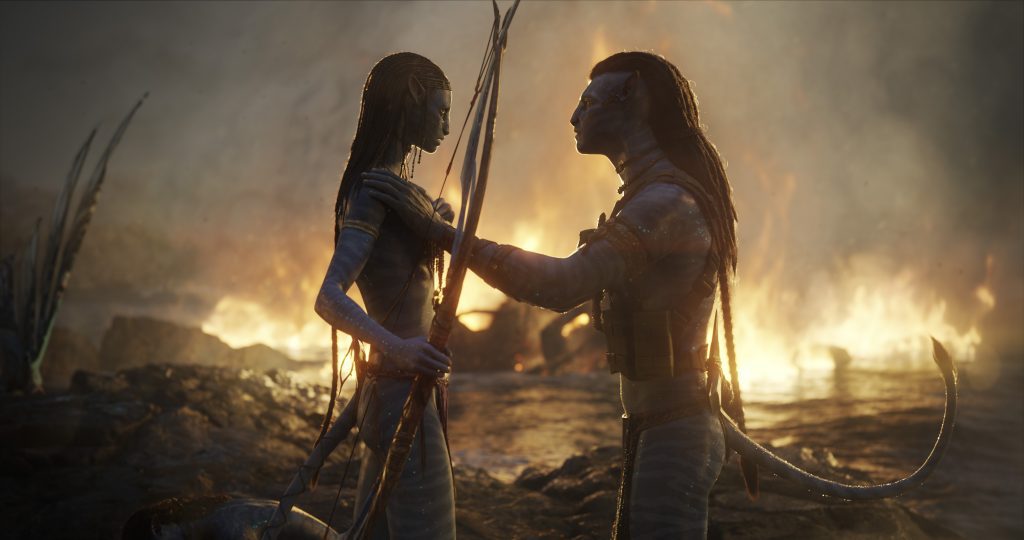 This also means that in order to get the full and most satisfying experience, you absolutely need to see Avatar: The Way of Water in the best and most ideal theater situation. This means in 3D and in IMAX, RPX, or Dolby Atmos. Anything less and honestly I don’t think it’s worth it. So much of the film is reliant on the technology as opposed to the story and that is one of its biggest flaws. I rewatched Avatar prior to seeing The Way of Water, and it simply doesn’t live up to the experience when I saw it in theaters back when it was released. A big part of me feels The Way of Water will be the same. It doesn’t matter how good or groundbreaking the technology is when the majority of audiences will watch a film through streaming and on their TVs. Visual effects can only take a film so far.

And unfortunately Avatar: The Way of Water‘s story doesn’t get the same attention as its visuals. The main beats of the story remain the same, only the forest has been replaced by the ocean. Jake and his family now must relearn the aquatic ways of the Metkayina tribe as they struggle to fit in as outsiders much like Jake was an outsider in the first film. There’s even an underwater tree representation of Eywa to fill the void after the destruction of the Hometree. Meanwhile the main conflict is once again between Jake and Colonel Quaritch. Don’t get me wrong, the story and characters are much more fleshed out this time around than the original, but they’re still not that great. There is an irony to Quaritch as he is forced to become one of the very things he hated. The new family members bring some much needed motivation as well, although some of their side stories such as Jake’s son Lo’ak befriending and bonding with the whale-like tulkun can go on for far too long. I was waiting to hear narration by David Attenborough Broadcaster, as some scenes felt pulled directly from a nature documentary and not an action blockbuster. As great as everything looks though, the story feels all too familiar.

It’s never a good idea to bet against James Cameron, whose previous two films Avatar and Titanic have gone on to be two of the top grossing films of all time in the world. I have no doubt that The Way of the Water will dazzle audiences. It’s without a doubt a visual masterpiece. At the same time, it also feels somewhat hollow, like a glorified tech demo meant to show off the latest and greatest of what’s capable on screen. It is absolutely worth seeing on the biggest screen possible at least once, just to have the experience. Aside from that, however, I struggle to find any other reason to return to Pandora.

Avatar: The Way of Water is an absolutely stunning work of art that deserves to be seen on the biggest screen possible. At the same time, it’s a film whose visual effects upstage and overshadow everything else as it recycles many of the same ideas and themes of its predecessor. The return to Pandora is exciting and breathtakingly beautiful, but unlike the film’s running time, its lasting impression is rather short.