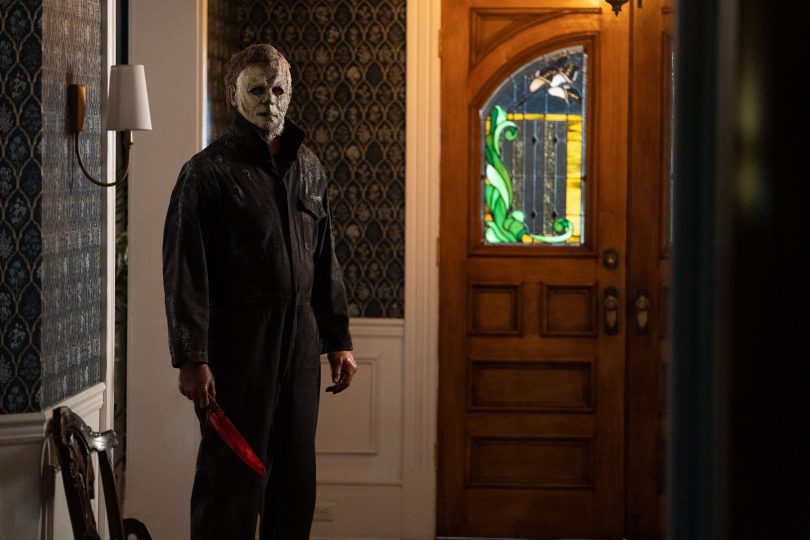 As the title suggests, Halloween Ends is the end to the new trilogy of films that began in 2018 with Halloween and Halloween Kills. It’s the final showdown between Jamie Lee Curtis’ Laurie Strode and Michael Myers that began over 40 years ago with the original Halloween. Instead of a bang, however, Halloween Ends goes out with a whimper. The horror slasher diverges too much from what made the franchise stand out and does so too late in the game, resulting in a mindboggling mess of a film that saunters along as slow as Michael Myers stalking his victims. Halloween Ends can’t end soon enough.

It’s been four years since Michael Myers’ latest killing spree terrified the town of Haddonfield, and residents are still on edge wondering when he will strike again. Laurie has done her best to move on but the trauma still follows her and her family around like a dark cloud. Meanwhile, former babysitter Corey (Rohan Campbell) lives as a pariah ever since he was accused of murdering a child in his care who died after accidentally falling off a balcony. Laurie understands his ostracization and attempts to set him up with her granddaughter Allyson (Andi Matichak), who herself has plenty of trauma after the events of Halloween Kills. When it seems like Haddonfield is just on the verge of healing, a series of disappearances and murders once again spreads fear across town. Evil has returned.

It’s interesting to note that Halloween Ends uses the same title font and color as Halloween III: Season of the Witch. Not only are both films the third of their respective trilogies, but Halloween Ends feels like a departure from the franchise roots just as Season of the Witch took the story in a completely different direction. The first two acts of the film primarily focus on Corey and the trauma of dealing with an accident where everyone thinks you murdered a kid on purpose. He just wants to try a live a normal life but everyone looks at him as this evil person. After getting bullied and tossed off a railing by a group of high school teenagers, he finds himself waking up in a sewer and comes face to face with a still recovering Michael Myers. To make a weird story weirder, Michael appears to transfer his evil essence into Corey and infect him, turning the young man traumatized by an accident a year ago into a psychopath hellbent on revenge. And that’s where the film begins to fall apart. 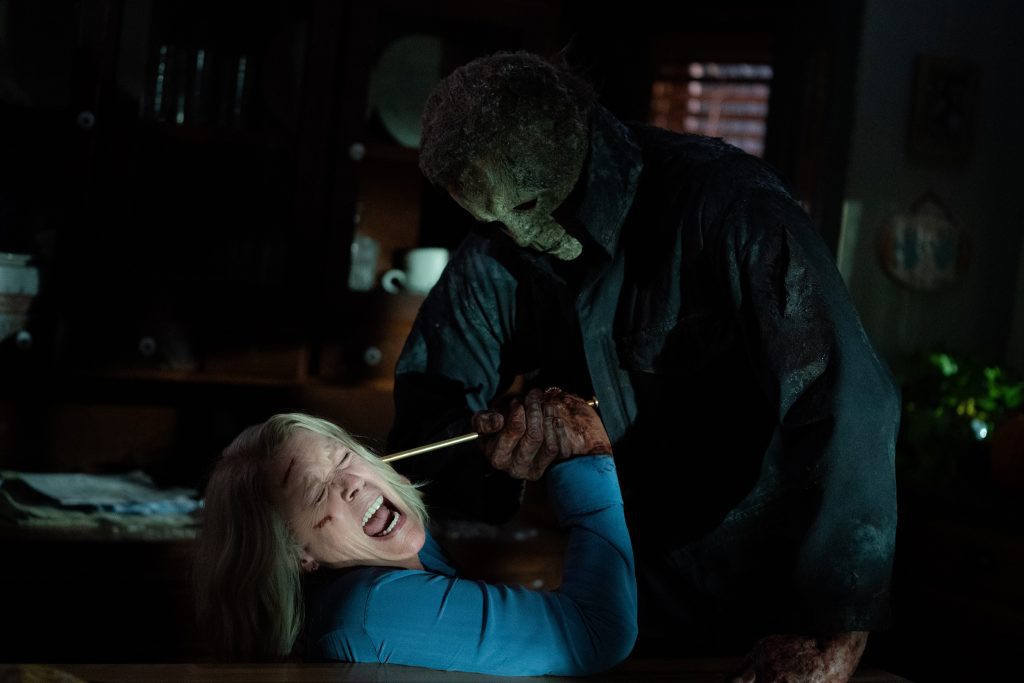 Halloween Ends focuses on the idea that evil is a virus. There have been discussions on whether Michael Myers was evil incarnate or if evil simply took control of him, but the film makes the drastic decision of showing that it is something that can be passed from person to person, much in the same way that fear washes over the entire town. It’s a bizarre theme to push for the third film in the trilogy that also acts as an “end” to the entire franchise, although I’m sure that we will inevitably see another Halloween film sometime in the future so long as there is money to be made. It’d be a different story if the trilogy set the stage for this idea at the beginning, but having the majority of the third film devoted to this newly introduced character being “possessed” by Michael is awkward and out of place in the franchise and doesn’t work. The tonal shifts are all over the place as well, from the strange romance between Corey and Allyson to the even weirder interactions between him and his parents.

Halloween Kills was not a good film, and that was a pretty straight forward slasher with Michael Myers. I almost wonder if the producers saw the reception to that film and decided to take the story in the complete opposite direction. That is what Halloween Ends feels like. It attempts to paint a bloody picture about what evil is but fails to lay any groundwork for it while ignoring the tension and brutality that made the franchise so great in the beginning. This was supposed to be the climatic final confrontation between Laurie and Michael, and while they do finally battle it out, it’s too little too late. I was a fan of 2018’s Halloween and excited to see where the reboot of the franchise was headed. Unfortunately it has been downhill from there.

Halloween Ends lands with a thud. While Laurie and Michael do finally get a final clash that’s gruesome and satisfying, the roundabout story the film takes to get there is ultimately disappointing. There is so much unnecessary fluff to the film that drags it down in its attempt to create a deeper and richer explanation of evil. It’s all rather unfortunate. Rather than reinventing the franchise, Halloween Ends simply regresses. Both Laurie and Michael deserve better.

Halloween Ends goes out with a whimper. The horror slasher diverges too much from what made the franchise stand out and does so too late in the game, resulting in a mindboggling mess of a film that saunters along as slow as Michael Myers stalking his victims. Halloween Ends can’t end soon enough.