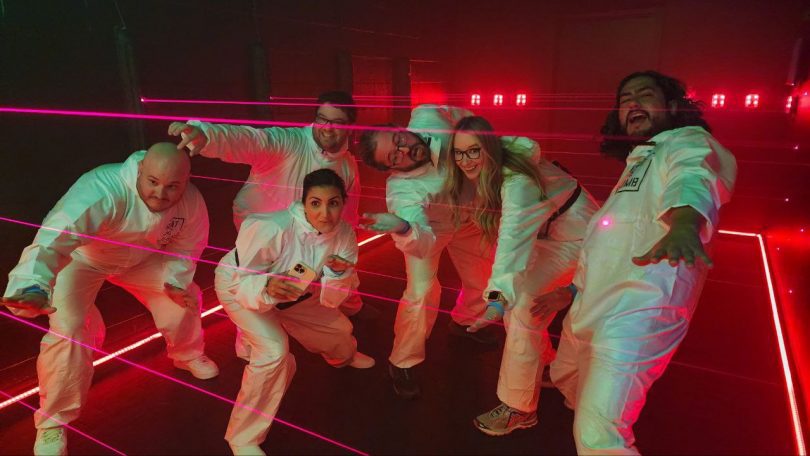 Atlanta has a brand new interactive gaming experience called Beat The Bomb and after attending a grand opening party earlier this week and trying out its escape room-esque game I can confirm that it is an absolute blast for any group of friends.

Beat The Bomb is touted as “the world’s largest paint bomb” and its premise is simple; disarm the bomb in time or get blasted by a cannon of paint. I joined my fellow Nerd Herd Live crew and hazmat suited up to put our skills to the test. The gaming experience features four puzzle rooms followed by the fifth and final bomb room. Players spend 10 minutes in each room completing rounds of challenges and earning precious seconds that get added to your final time in the bomb room. The better your team does, the more time you have to diffuse the bomb and win.

Our team of six called ourselves Hurt Locker after the film, The Hurt Locker; a fitting name for a bomb disposal unit we thought as we put on clean white hazmat suits over every inch of our clothes so that no paint would get in. Our first room was called Hack Attack and required us to work together and solve various touchscreen puzzles where the clues and solutions were all jumbled across different screens. We quickly learned that communication between teammates is key across all rooms if you’re going to strive for a high score. At the end of a room, your points are tallied and your earn seconds are displayed along with how you did in comparison to previous teams. Next we ventured into Laser Maze where, as the name suggests, we were greeted by a room full of laser beams. This time we had to move from one side of the room to the other while dodging the lasers. This was the most fun and most exhaustive room. By the end, Hurt Locker had placed within the Top 2% of all teams (go us!), and I was drenched in sweat from all the back and forth running. Here’s a tip for those planning on coming to Beat The Bomb; wear comfortable workout clothes.

Still on the high from doing so well at Laser Maze, our team moved on to Echo Chamber. Here players must quickly remember and repeat a pattern of shapes displayed on the wall. It’s essentially a team version of Simon Says. This is one of the chambers where having more players can be beneficial. You only have a few short seconds to repeat the pattern, and with six players, we were able to have each of us take a symbol. It may take a few tries to get the coordination down but if you’re quick enough you’ll be successful. Following that, we went into the last room before the bomb room; Floor Grid. This one requires you to stand on the matching symbols displayed on the wall as cameras track your movements. It starts out rather easy but then ramps up in difficulty as “fireballs” are fired across the room and darkness blackens out the screen. This room proved to be our most difficult challenge (blasted fireballs!) and we only managed to get within the Top 28% in it; our worst percentage of the event.

At last it was time to disarm the bomb! The bomb room has the team take control of a tank and you must navigate your way through a maze and shoot 10 numerical targets in order. It sounds easy, but each person is given a controller that only does a single task. One moves the tank left, one moves it right, one moves it forward, one aims, one shoots, and one displays the map. Like all the previous rooms, teamwork is essential if you are going to diffuse the bomb. Despite our best efforts and all the time we had earned, we only managed to get 7 out of the 10 targets before the timer ticked down to 0:00. Seconds later we were all blasted from head to toe with neon paint, covering us in brightly colored failure. It’s an experience unlike anything else and so much fun. Don’t worry, even if you do succeed and disarm the bomb, you will still get blasted by paint. That’s the most fun part of the game, after all. 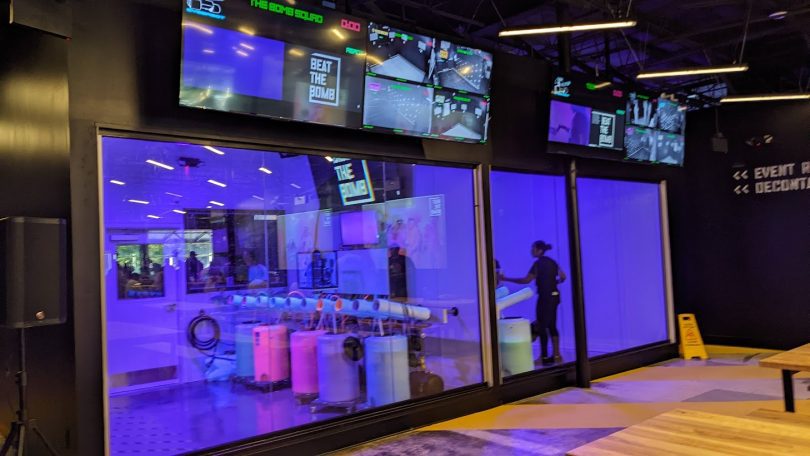 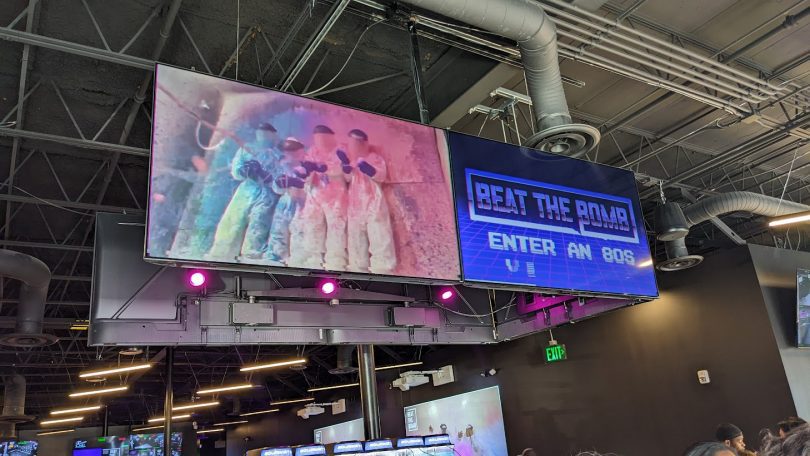 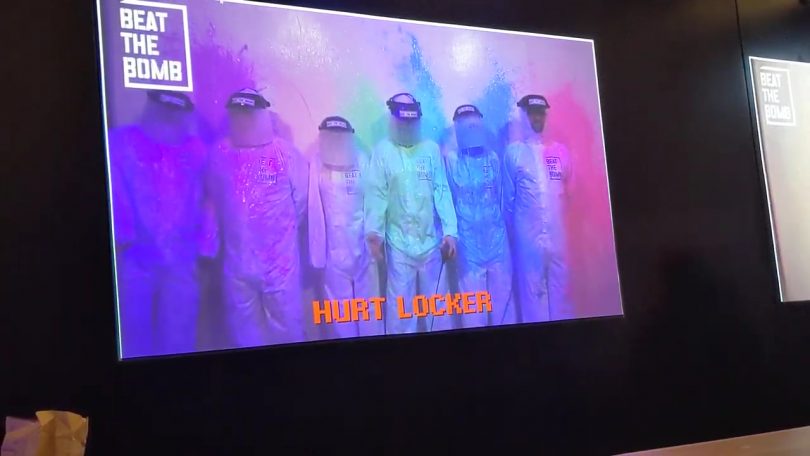 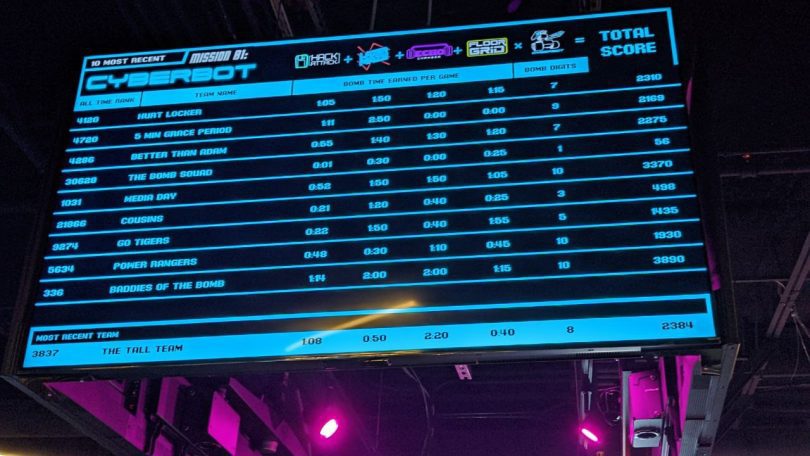 The whole Beat The Bomb gaming experience takes about an hour to complete. Atlanta’s location has two games running simultaneously and there are gaming bays where you can play smaller interactive games while you wait. There are also cameras in every room so you can watch other teams as they progress through. The final bomb room also has a glass wall so everyone gets a view of every bomb blast. It’s a whole lot of fun, whether you’re playing or waiting. There are food and drink options as well so if you work up an appetite like we did they got you covered. Everything is also tracked through digital wristbands and final scores and rankings are displayed on monitors outside. There is an immense satisfaction knowing how you stack up against other teams. It’s also great for repeat visits as you strive to get better and higher scores.

Tickets can be purchased starting at $35 per person at Beat The Bomb Atlanta. You can also rent one of the Game Bays for $10 per hour if you just want to watch and not do the experience. So grab a few of your friends and check out the newly opened Beat The Bomb in downtown Atlanta. You’ll have a blast, just like I did!