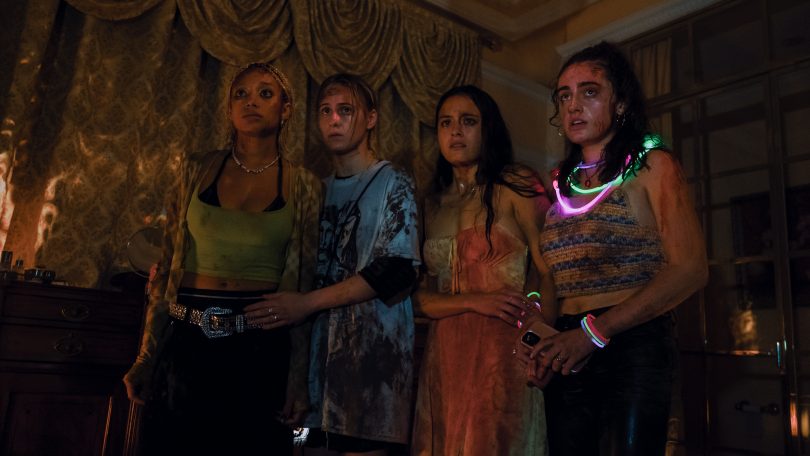 In the wise words of one Abraham Simpson, “I used to be with it, but then they changed what it was. Now what I’m with isn’t it, and what’s it seems weird and scary to me.” Watching The Simpsons growing up I identified with a young Homer, but now that I’m older and in my mid-30s I understand Grandpa Simpson more and more with each passing year. The “it” I’m referring to is Bodies Bodies Bodies, a dark comedy horror that revolves around a death during a house party with a group of young friends. While the film goes heavy on its Gen Z references, it never digs itself out of its own grave except for the final 15 or so minutes. By then it’s too late as it never is able to rise to its full potential. Maybe I’m just like Grandpa Simpson though and just don’t understand. Either way, this is not the film for me.

Newly enamored couple Sophie (Amandla Stenberg) and Bee (Maria Bakalova) visit Sophie’s wealthy friends at their mansion for a “hurricane party” filled with booze, drugs, and good times. Sophie isn’t exactly on the best terms with everyone having recently gone sober and Bee is meeting everyone for the first time so tensions are high. When the storm arrives and pushes them from the pool into the house, they decide to play a fun little game called Bodies Bodies Bodies where one person is randomly assigned as a killer and must secretly “kill” until their identity is discovered. But when someone’s actual dead body is discovered lying in a pool of their own blood, the game suddenly becomes very real. With an actual killer amongst them, everyone becomes suspicious of each other, and it now becomes a matter of survival. 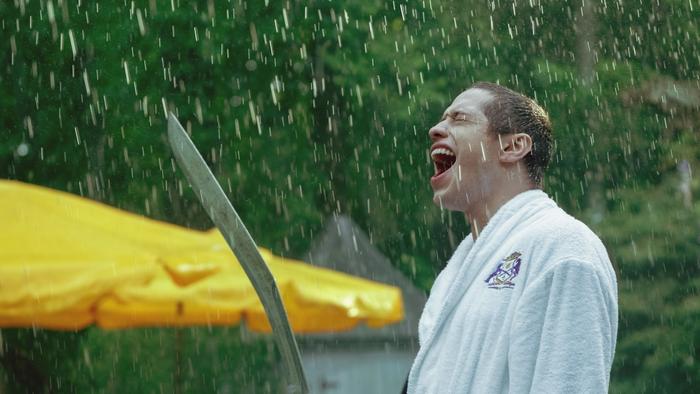 Bodies Bodies Bodies is your typical case of whodunit where everyone is suspect. It’s the film version of Among Us where someone is picked off one by one and the murderer is drawn more and more out into the open as the film goes on. It starts off rather generic in this fashion as the characters are introduced and their motivations are revealed. The film throws a lot of distractions. It’s loud, obnoxious, and chaotic. Everything attempts to tie by to its Gen Z identity, with some tropes hitting better than others. Rachel Sennott’s podcaster Alice has some great timely lines and Lee Pace as Greg, the odd older man out, can be awkwardly hilarious at times. But for the most part the majority of the dark humor doesn’t stick its landing. It flies by without a care in the world.

Personally I was more invested in the murder and, like it’s humor, that too can be very hit or miss. Bodies Bodies Bodies makes good use of its single location setup but the lighting is constantly off and everything is way too dark most of the time to get a decent sense of what is going on. Maybe my eyes are just getting bad in their old age. There are a few twists and turns in the story to keep audiences guessing right up until the very end, but the ultimate payoff doesn’t feel worthy of its journey. Things do pick up towards the end and the script gets tighter and more ferocious as it leans into its dark humor that pokes fun at all the things the younger generation are into. It’s not enough to make up for its lackluster beginning unfortunately.

Bodies Bodies Bodies attempts to do something interesting with its dark take on the Gen Z crowd but ultimately ends up being just another standard mystery thriller. There will be an audience it connects with; I’m just not it.

While the film goes heavy on its Gen Z references, it never digs itself out of its own grave except for the final 15 or so minutes. By then it’s too late as it never is able to rise to its full potential.