The Predator franchise has been around for over 30 years spanning various films, crossovers, video games, and books, but nothing has come close to capturing the terror, intensity, and action quite like the original. Until now. Prey is everything fans could want from a Predator film. It recaptures the horror and brutality of being hunted by the strongest creature in the galaxy. Hunter or hunted, Prey delivers a satisfying tale of survival that puts the franchise back at the top of the food chain.

Set in the Comanche Nation in 1719, Naru (Amber Midthunder) trains with her tribe to become a fierce hunter and warrior. Because she is a woman, however, everyone doubts her skills and believes she would be better suited for more womanly tasks like cooking, foraging, or tracking. While out on the hunt for a lion that has been spotted near the tribe, she discovers the trail of something potentially even bigger and more dangerous but is waved off by her fellow hunters. A determined Naru soon learns that the tracks belong to a mysterious creature no one has ever seen before, and it is on the hunt for them.

Prey goes back to Predator basics with the hunters becoming the hunted. The heart and center of the film is Naru, and Amber Midthunder delivers a stunning performance that captures both the fear of being hunted as well as the strength of fighting for her survival. We experience it all from her point of view and share in her terror and courage. Naru grounds the entire film, and Midthunder’s performance brings out all the emotion, allowing the Predator scenes to hit harder. The Predator would be nowhere near as scary or threatening if we didn’t have her story. 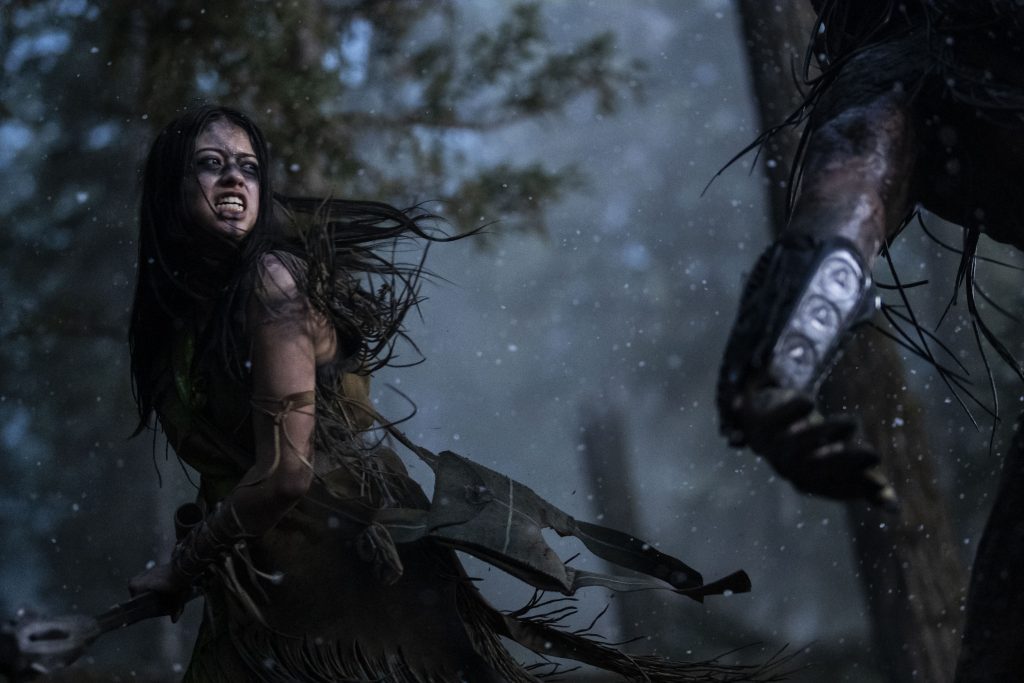 And the Predator is absolutely terrifying. Like the original, he mostly lurks among the tree tops as an invisible presence, but we can see the results of his handywork scattered among the forest. Slowly, more and more of the character is revealed as Naru learns of its existence and then devises a strategy to fight and survive. It lives for the thrill of the hunt, and Naru provides a worthy challenge. She’s smart, resourceful, and quick to learn about this new enemy. She isn’t one to go down without a fight. And just as the Predator enjoys the competition, Prey thrives from the constant struggle of its characters. Nothing is easy and every moment is earned. The bigger the challenge the more satisfying the victory, and Prey stands victorious at the top.

With callbacks to the original as well as new and exciting additions, Prey reinjects new life into the Predator franchise. It’s smart, scary, and action-packed. I only wish it was playing in theaters because while the film is great at home, I feel like its meant to be seen on the biggest screen possible. Don’t sleep on this one, otherwise your skeleton might just end up as a trophy on the Predator’s wall. With Prey, the Predator returns to being the apex hunter.

Prey is everything fans could want from a Predator film. It recaptures the horror and brutality of being hunted by the strongest creature in the galaxy. Hunter or hunted, Prey delivers a satisfying tale of survival that puts the franchise back at the top of the food chain.