There is nothing particularly new or groundbreaking about The Gray Man; it’s influences can been clearly seen in the James Bond and Bourne franchises. That does not mean the film isn’t entertaining. Far from it, actually. Fists fly, guns fire, and everything and anything explodes; all in a blaze of glory. The Gray Man puts the action genre’s best elements on display, front and center, for all to experience. The film hits Netflix next week, but don’t miss out on seeing it on the big screen in theaters today. It’s well worth it.

Sierra Six (Ryan Gosling) is a highly skilled black ops mercenary recruited into a secret CIA program to carry out missions no one else can. While on his latest mission, however, Six uncovers information that leads to him becoming the next target from those higher up in the program. To kill the best, you need the best, and the psychopath Lloyd Hansen (Chris Evans) is the perfect man to go after him. Six isn’t going down without a fight though, and he will do whatever it takes to bring the secrets he has to light.

The Gray Man‘s plot is pretty standard boilerplate for any action spy thriller, but where the film excels is with its action. Right from the start we’re introduced to Gosling’s Sierra Six who has been locked up in prison and is offered “freedom” in exchange for a lifetime commitment to this secret government assassin program. Flash forward over a decade and Six is still working, showing he isn’t one to go down so easily. It isn’t long before we can see why. The first fight scene of the film is explosive, literally. Taking place amid fireworks celebration, Six quickly eliminates a handful of bodyguards before going toe-to-toe with his target as they are surrounded by colorful gunpowder rockets. It’s a sight to behold and whets the appetite for what’s to come. 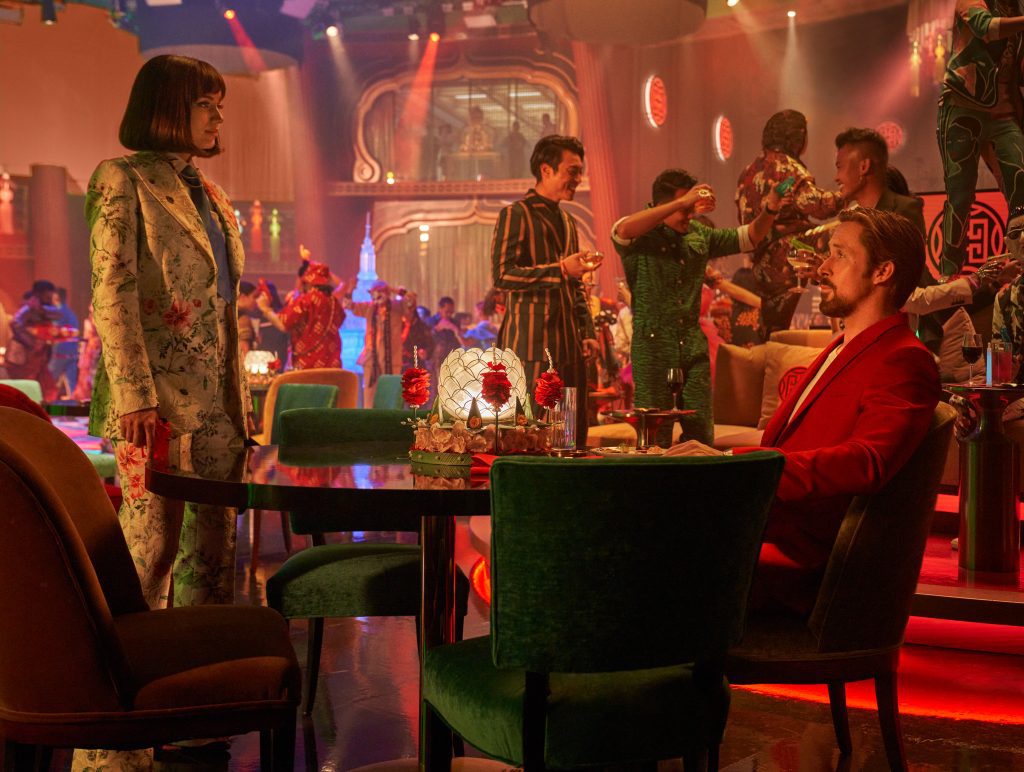 Despite the Sierra assets being part of a secret government program, there are still rules that they follow. That’s where Lloyd Hansen comes in. He’s just as trained but works as an independent contractor and thus doesn’t follow any rules that the government might have. He has a target and will do whatever is necessary to take them out. Chris Evans is right at home as the unhinged and unrelenting Lloyd Hansen, bringing the confidence of Captain America alongside the maniac of Knives Out‘s Ransom. My biggest complaint about the movie is how much Lloyd sits on the sidelines, sending his goons in to do the job of killing Six rather than fight him himself. There are a few teases here and there, but they don’t get their shining big moment together until the end. The wait is worth it, however.

Ana de Armas, who plays a fellow agent helping out Six, kicks plenty of ass herself as well. It’s what I wanted to see more of her in No Time to Die. Nothing holds her back from going up against the likes of Evans and the hordes of mercenaries he sends after her and Gosling. I absolutely cannot wait to see her take on more action roles as she has often become the highlight of any movie she’s in.

The Gray Man delivers one of the most satisfying action films of the year. Everyone in the all-star cast gets their time to shine with interesting and unique fighting sequences that showcase the intense choreography instead of hiding it behind a blur of swiftly moving bodies. The story is pretty basic, but that all doesn’t matter too much if I’m being honest. It’s good enough to keep the action moving forward and audiences interested in the characters. The Gray Man dazzles with its colorful and entertaining action.

There is nothing particularly new or groundbreaking about The Gray Man; it’s influences can been clearly seen in the James Bond and Bourne franchises. That does not mean the film isn’t entertaining. Far from it, actually. Fists fly, guns fire, and everything and anything explodes; all in a blaze of glory. The Gray Man puts the action genre’s best elements on display, front and center, for all to experience.