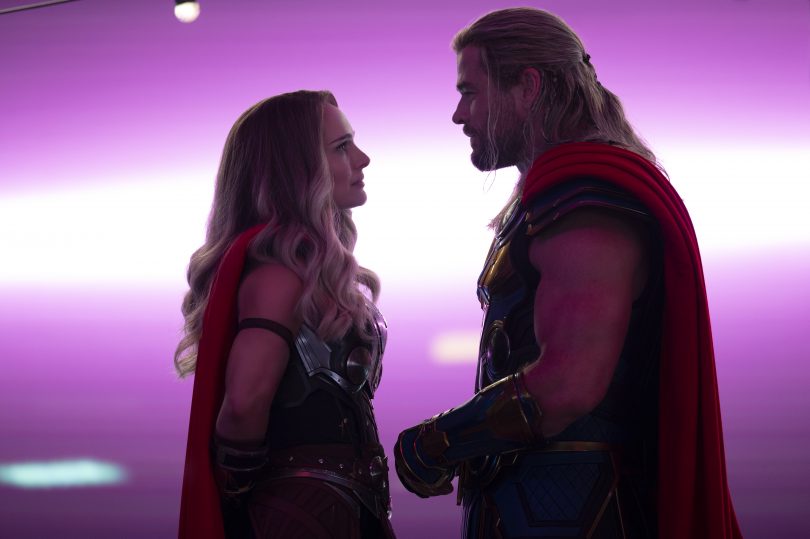 Taika Waititi is one of the most entertaining directors working with Marvel Studios, with Thor: Ragnarok still remaining as one of the best entries in the Marvel Cinematic Universe. It brought color and life to the MCU and showed the franchise’s potential when a creative vision like Waititi is at the helm. Thor: Love and Thunder is its follow up and with Waititi once again steering the ship expectations are no doubt high. While not as game-changing as Ragnarok, Love and Thunder once again shines brightly with a flashy confidence as it takes audiences on a wildly entertaining journey of love and adventure.

After saving the world countless times, Thor embarks with the Guardians of the Galaxy to go and save other worlds. But being the hero all the time begins to grow weary on Thor, and he begins to wonder what he wants out of his own life for himself. That inward reflection is shortly lived when word quickly spreads of a monster named Gorr who is travelling the universe killing gods.  When his journey takes him back to New Asgard to confront this god butcher, Thor runs into an unexpected ally, his ex-girlfriend Jane who now possesses a patched up Mjölnir and goes by Mighty Thor. After a confused reunion, the two old flames must team up along with Valkyrie and Korg if they want to stand even a chance at defeating Gorr.

There is a lot going on in Thor: Love and Thunder, and Taika Waititi doesn’t waste a beat introducing Christian Bale as Gorr the God Butcher in the opening credits, setting him up as a tragic character who has lost his family due to the gods’ inaction despite giving them his unyielding adoration. After gaining possession of the powerful Necrosword, Gorr becomes corrupted by its power and vows to destroy all gods. Bale is utterly terrifying as Gorr, who has mutilated himself to remove all of his previous tattoos he received in tribute to the gods. As the film progresses, he becomes scarier and scarier as the sword eats away at his soul and body. Gorr literally sucks the life out of everything around him, draining the world of color and enveloping his surroundings in darkness, living in the shadows. One of the best scenes in the film finds Thor, Jane, and Valkyrie confronting Gorr on a tiny moon planet in black and white; a stark contrast to the films colorful palette. Flashes of color occasionally dazzle across the screen, either from Mjölnir or other godly sources of power, bringing light and life to the otherwise desolate planet. You cannot deny the beauty that is in every frame of Thor: Love and Thunder.

As far as the story goes, Love and Thunder perhaps bite off more than it can chew. Half the story is Thor trying to find his own purpose in life and half is also Jane’s strength and struggle with becoming Mighty Thor herself. Throw in a new villain to introduce along with new worlds and gods like Zeus and there’s a lot of ground that needs to be covered. It’s ground that is mostly covered through exposition and flashbacks. The entire overarching story has a lot of great ideas and themes with love at the center of most of them. Thor’s attempts to rekindle his romance with Jane, and Mjölnir too, are fitting as is Gorr’s motivation to kill all gods because of his love for his daughter. Unfortunately the film doesn’t have the time to slow down and explore any of these themes in depth before it has to move on to the next scene. Thor: Love and Thunder is plenty satisfying, but it needed more Gorr. It needed more of Jane as Mighty Thor. It needed these things to help balance out the shifting humor and serious tones.

Like Ragnarok, Love and Thunder brings the jokes down more ferociously than Thor’s hammer. There are so many gags in the film from screaming goats to the ongoing “relationship” drama between Thor and Stormbreaker now that Mjölnir is back in the picture. The majority of it lands, although I can see how it can become overwhelming for some audiences. There are also a handful of serious, more toned down moments in the film. They don’t land quite as hard, mostly because they tend to either begin or end with a joke. Everything feels a little bit rushed as the story quickly moves from one beat to the next, never giving you enough time to fully absorb any one moment for long.

Thor: Love and Thunder is another exciting and entertaining adventure for Thor and friends. There’s a lot of love to go around in the film, although it struggles to hit on any deeper levels. Christian Bale is a fantastic addition as villain Gorr the God Butcher, and its wonderful to see the return of Natalie Portman as Jane Foster who actually gets to stand side-by-side with Thor rather in his shadow. Ragnarok remains the pinnacle Thor film, but Love and Thunder isn’t too far behind.

Thor: Love and Thunder is Ragnarok‘s follow up and with Waititi once again steering the ship expectations are no doubt high. While not as game-changing as Ragnarok, Love and Thunder once again shines brightly with a flashy confidence as it takes audiences on a wildly entertaining journey of love and adventure.