Home » Blogs » Illuminarium Atlanta Sends You to the Stars in New ‘SPACE: A Journey to the Moon & Beyond’ Experience 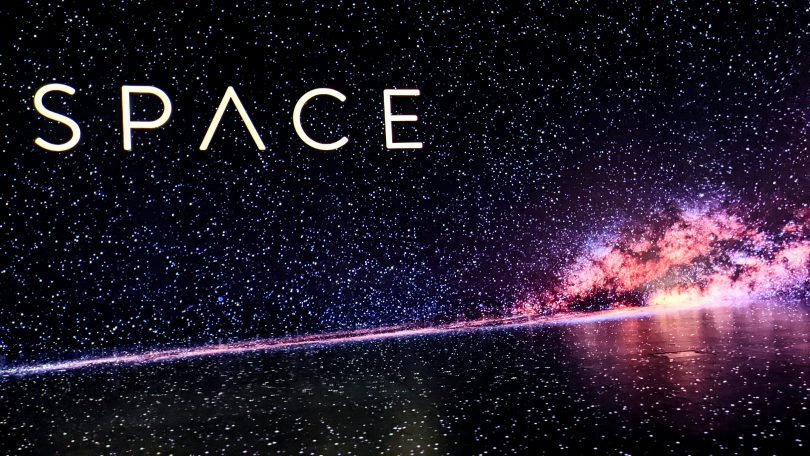 Space is considered to be the final frontier for the majority of us; an imaginative destination that has only been within reach to the absurdly wealthy as of late. Outside of spending hundreds of thousands of dollars to barely break the atmosphere, you’re pretty much stuck here on Earth. While Illuminarium Atlanta won’t physically get you to the stars, it does deliver the next best thing with its out of this world SPACE: A Journey to the Moon & Beyond experience. Premiering in Atlanta later this week on June 29th, I had the opportunity to check out the newest Illuminarium experience first-hand and had an absolute blast exploring our solar system!

For those of you unaware, Illuminarium is an experience where you explore a massive “empty” room that has 46 4k laser projectors pointing at every inch of wall and floorspace, immersing you in whatever experience they have running at the time. Coupled with 5,000 speakers and 141 movers beneath the floor along with specific scents being pumped in, and its about as immersive as you can get.

Like all missions to the moon, SPACE starts off on planet Earth where you arrive in a smaller but still huge room for the shuttle launch. As you listen to the words of President John F. Kennedy, the countdown begins and a fiery blast soon sends you hurtling towards the stars. It’s funny, I had never experienced Illuminarium prior to this so I wasn’t aware of what was exactly in store. When the rocket lifts off and is propelled upward I honestly thought that the floor was on hydraulics and was being lifted up all around for a brief moment. That’s how good the screens and sound systems are. The illusion is perfect. 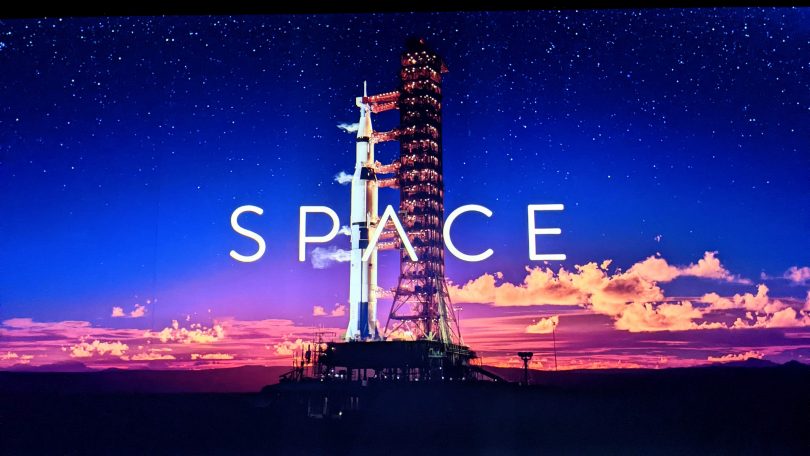 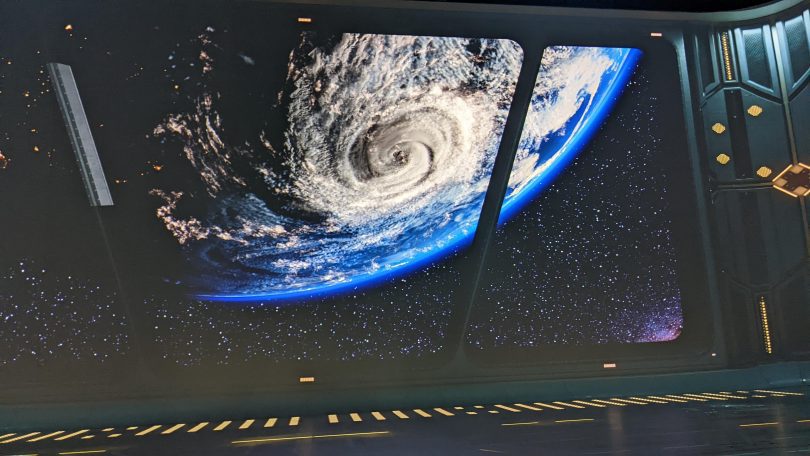 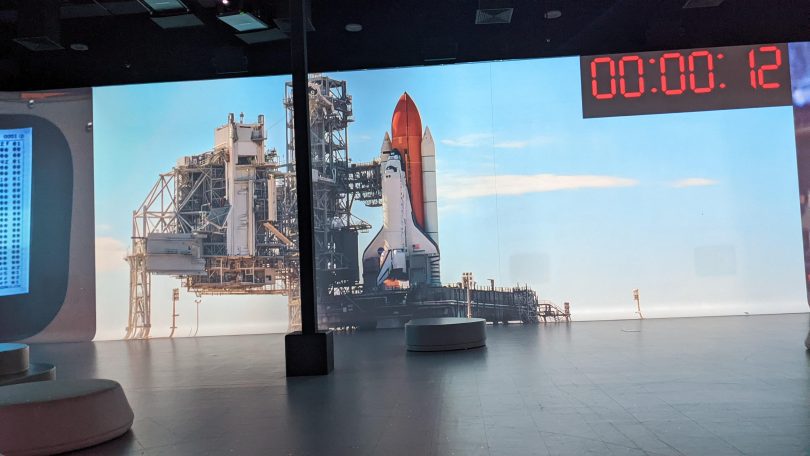 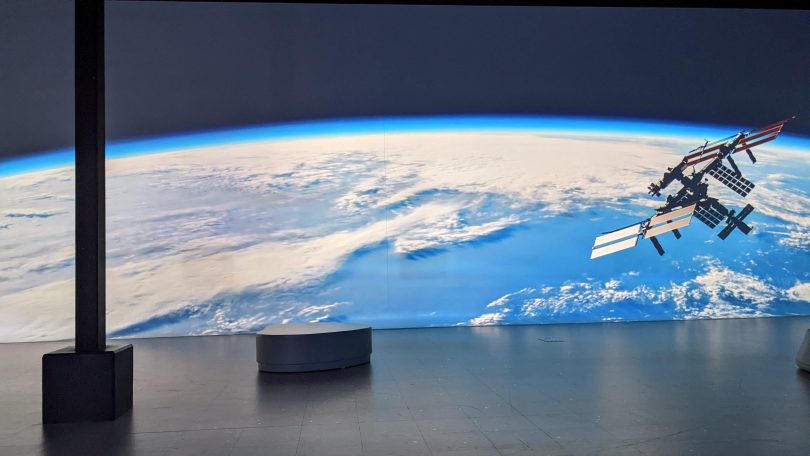 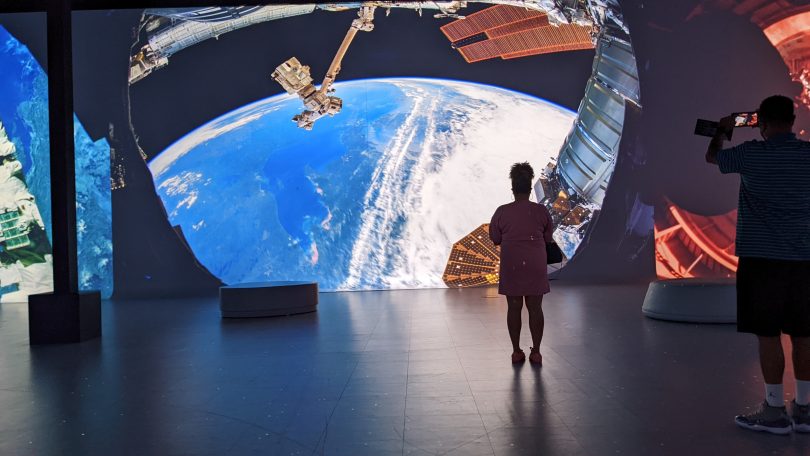 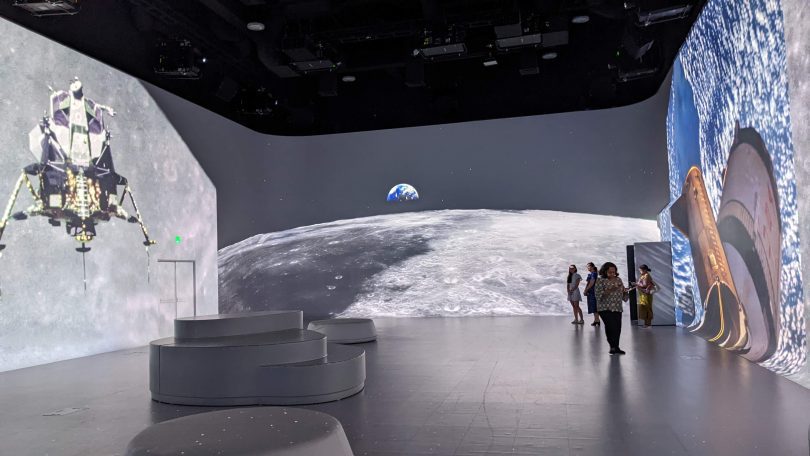 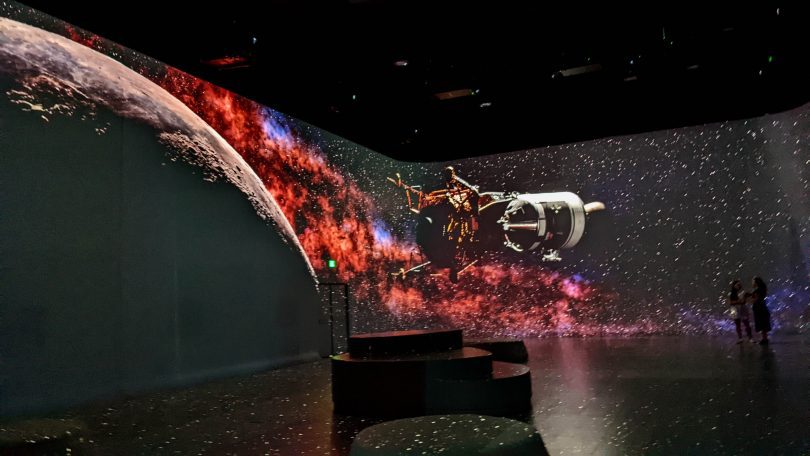 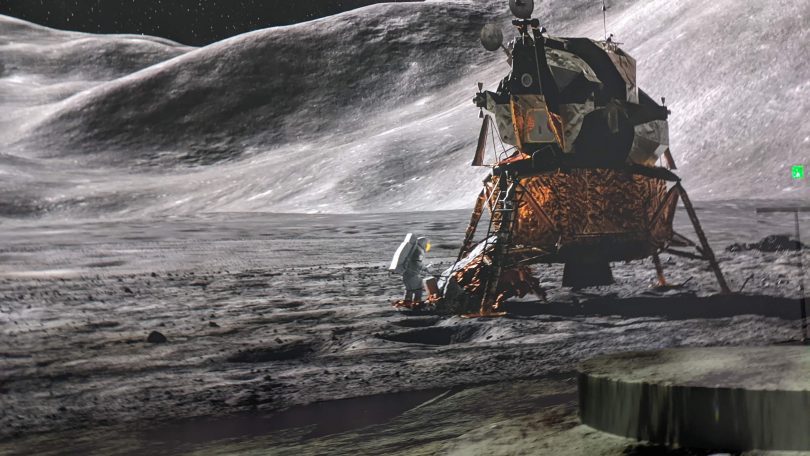 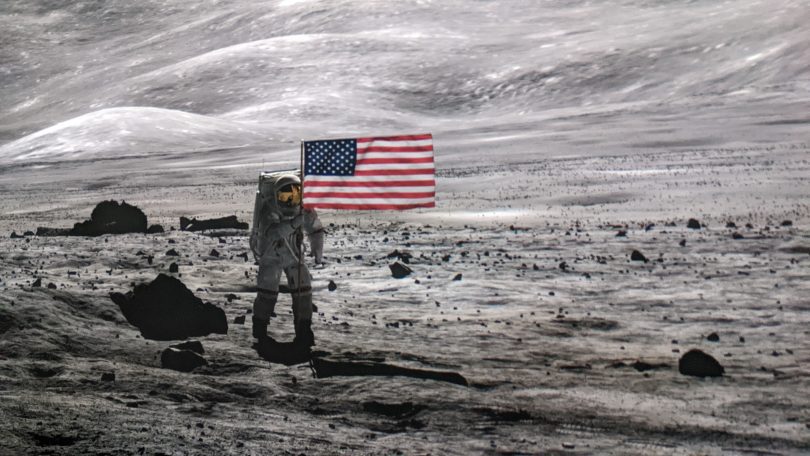 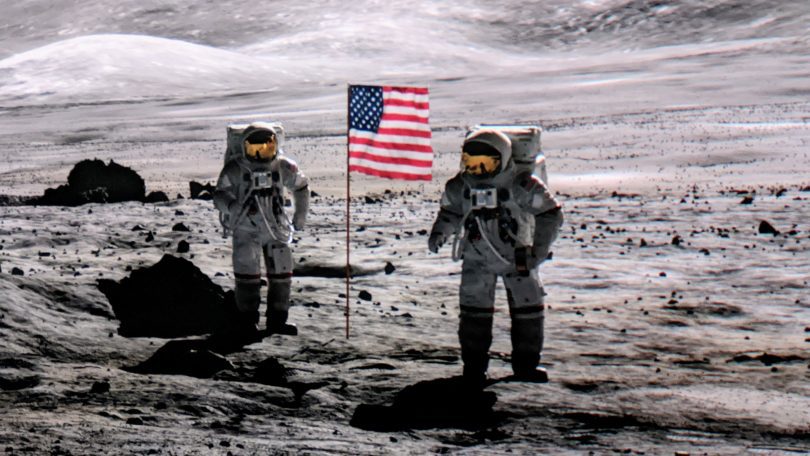 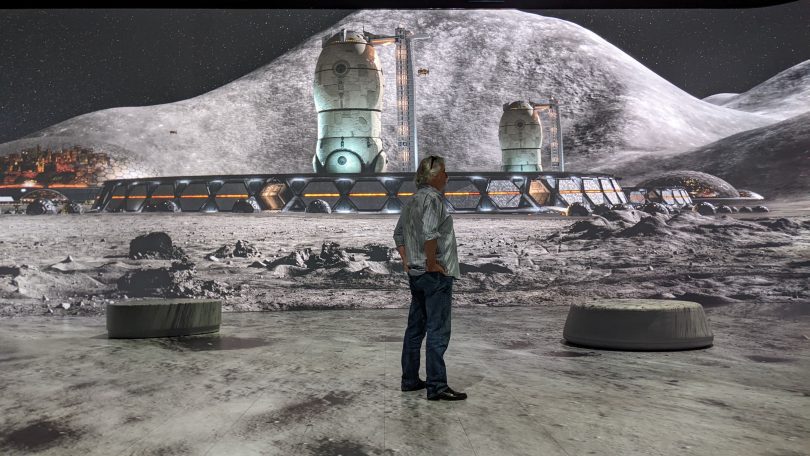 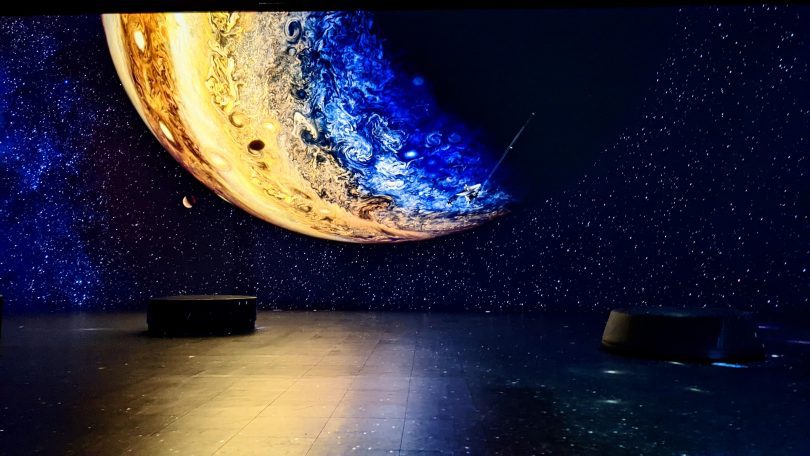 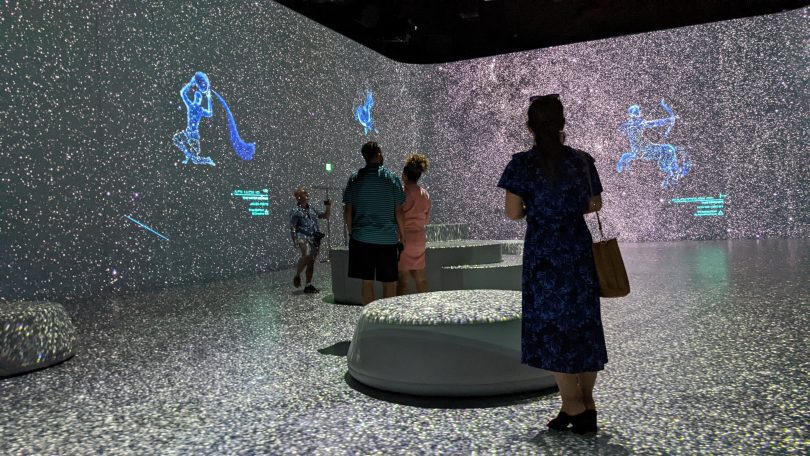 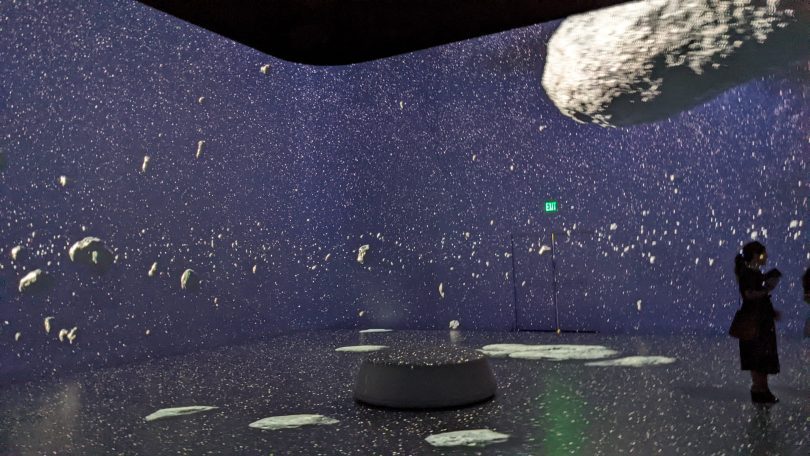 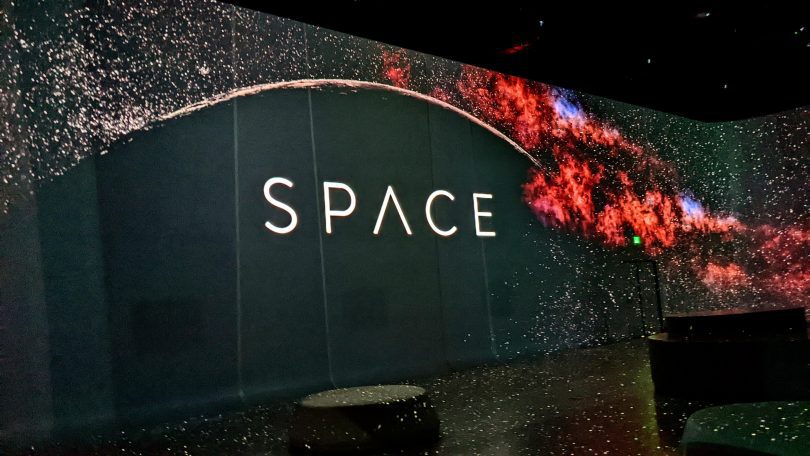 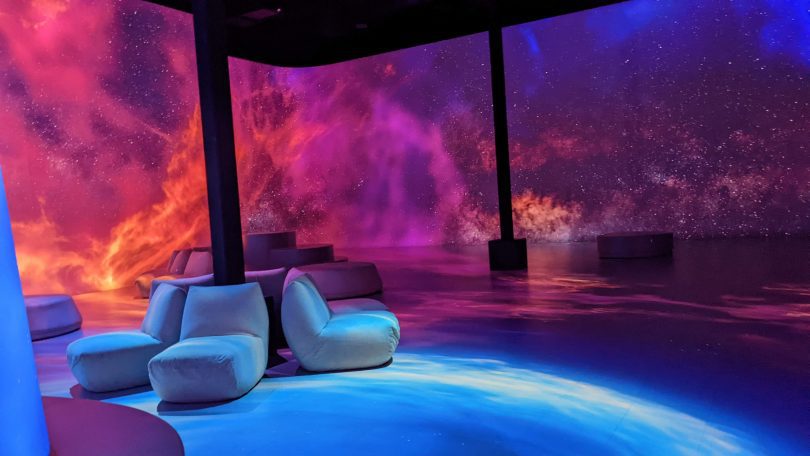 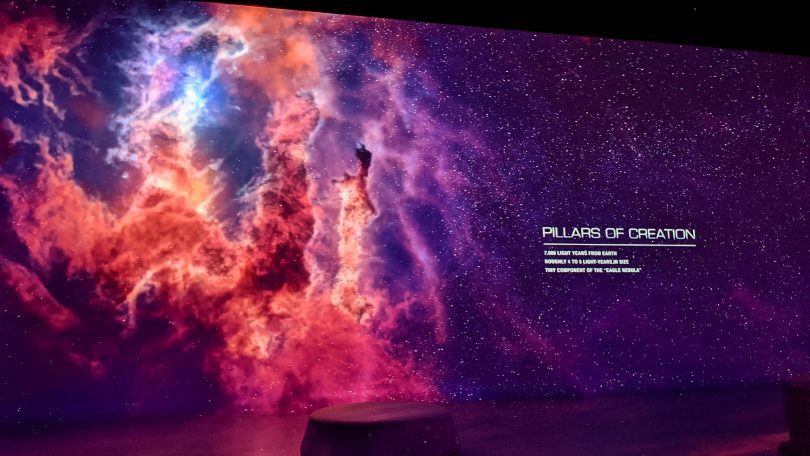 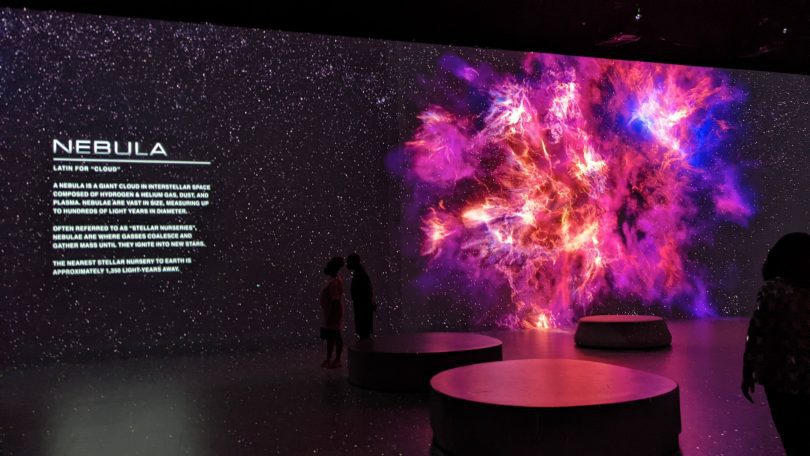 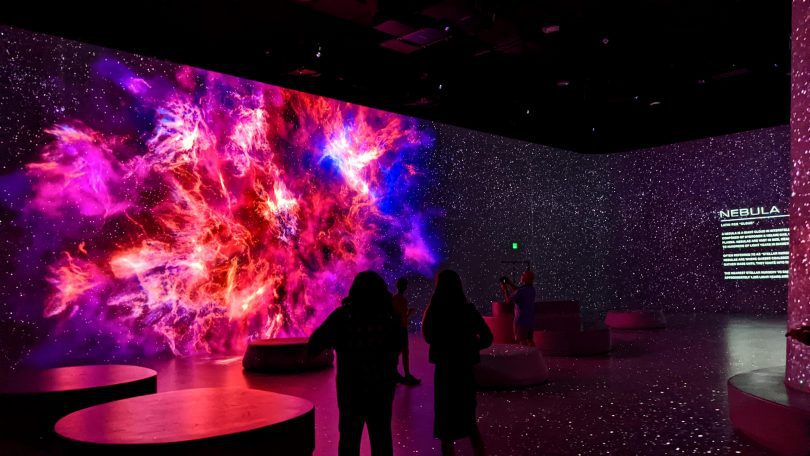 From liftoff, you’re then ushered into the next much larger room where the remainder of the experience occurs. Projected on the walls and floor of the space are eight separate experiences that are in a constant loop. As the title suggest, your spacecraft journeys to the moon where it lands and establishes a base before setting off to explore the constellations, other planets, and deep space. You’re welcome to wander and explore the entire room at your own leisure. Every wall has something different and with the footage constantly changing you’re going to want to walk and see as much as you can. Everything looks fantastic whether you’re up close or far away too so don’t worry about missing a great view. Every where is the best seat in the house, sort to speak.

I would also like to point out a few amazing details with some of the scenarios. While you’re on the moon, you can literally leave footprints on the dusty surface as you walk around. Look behind you and you’ll see your path clearly marked on the moon’s surface. In addition, while you’re exploring the Kuiper Belt you’ll see asteroids flying all around you. Here’s where you can play your own game of Asteroids and cause some space rock destruction. Instead of leaving footprints, this time around your movements will cause asteroids to blow up into pieces and send them flying in all directions. It’s a fun little addition to the experience that makes it more interactive and enjoyable as your exploring space.

The whole SPACE: A Journey to the Moon & Beyond experience lasts around 45 minutes in total, and I absolutely loved every minute of it. The immersion is fantastic and space lovers will have an absolute blast learning and exploring our solar system in this unique way. There’s something special about getting to walk among the stars. I left the whole experience relaxed and excited about space, eager to see the exhibit again. Now you can too when it opens on Wednesday in Atlanta, GA. Tickets are available now on the Illuminarium website.