I’m just going to say it; Jurassic World Dominion is not a good film. It’s an overstuffed, oddly acted film with a hodgepodge of plots that puts dinosaurs in the backseat when they should be front and center. There is a great nostalgia factor with the reunion of Laura Dern, Sam Neill, and Jeff Goldblum, but the excitement quickly fades fast, and all you’re left with is a big steaming pile of dino feces. It’s sad how far the franchise has fallen.

Four years following the incident on Isla Nublar and dinosaurs have embedded themselves all over the world. The majority of them have been captured and sent to a sanctuary run by the genetic company Biosyn. Outward appearances are not what they seem, however, and when a plague of giant locusts start destroying crops of Biosyn’s competitors, Dr. Ellie Sattler (Laura Dern) goes to Dr. Alan Grant (Sam Neill) for help in uncovering the truth. Meanwhile, Owen (Chris Pratt) and Claire (Bryce Dallas Howard) are living off the grid with Maisie Lockwood (Isabella Sermon). A clone of Charlotte Lockwood, she potentially holds the key to genetic engineering and is thus a high target asset of Biosyn.

Locust, clones, genetics; Jurassic World Dominion is about everything except dinosaurs. The film takes the worst part of Fallen Kingdom; the revelation that Maisie is a clone of Jurassic Park co-founder Benjamin Lockwood’s daughter, and decides to make it the main plot. It’s even worse because the last film appeared to tease a new direction for the franchise. It ended with Dr. Ian Malcolm (Jeff Goldblum) explaining how humans and dinosaurs are now going to be forced to co-exist while showing dinosaurs invading into human society. Dominion ignores that idea completely and decides to return to the same old formula only instead of a park it’s a sanctuary. The words might be different but the idea is the exact same. Dinosaurs are corralled in a controlled space and things inevitably go horribly wrong. 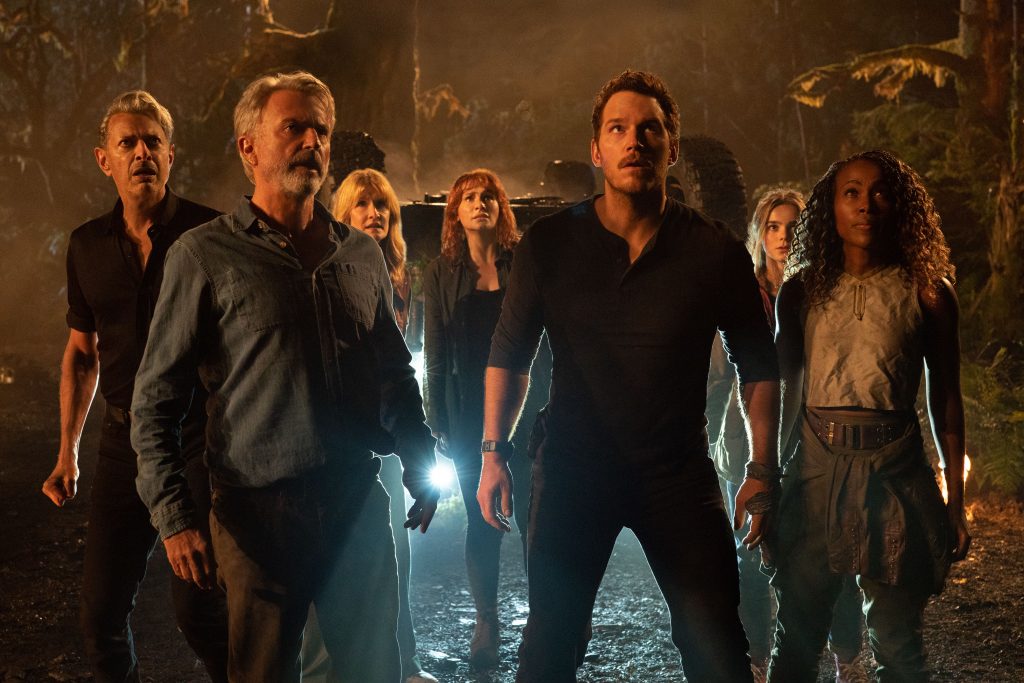 And honestly that would be fine if the story and action delivered. But it doesn’t. Between the OG Jurassic Park characters investigating the locusts and the newer Jurassic World characters dealing with the clone daughter, there’s too much going on and nowhere near enough dinosaurs. What interactions there are between humans and dinosaurs end up being ridiculous and not that scary at all. In the original, the dinosaurs were smart and terrifying. No one felt safe. In Dominion, all the main characters are covered in the thickest of plot armor. They literally come face to face with some dinosaurs only for them to lose interest and move on. That or if you can do the “Chris Pratt outstretched hand” maneuver you’re fine. I guess the Force is strong with Universal Pictures as well.

And like the dinosaurs, there was little in the film to keep my interest as it moved back and forth between locusts, clones, and genetic engineering gone wrong. Dominion is more concerned with delivering brief moments of fan service rather than tell a cohesive story. Sure, it might be cool to see a T-Rex walk perfectly in front of a circle to make the logo, but it just feels like pandering. It brings nothing to the story.

It’s difficult to make any kind of case for Jurassic World Dominion. It’s the weakest film of the franchise with an awful plot and cookie-cutter performances. Once again, the film teases the whole idea of dinosaurs and humans co-existing together. Before, I was curious about what that film would look like. Now, not so much. The franchise and audiences deserve better.

It’s an overstuffed, oddly acted film with a hodgepodge of plots that puts dinosaurs in the backseat when they should be front and center. There is a great nostalgia factor with the reunion of Laura Dern, Sam Neill, and Jeff Goldblum, but the excitement quickly fades fast, and all you’re left with is a big steaming pile of dino feces. It’s sad how far the franchise has fallen.