Alright, first off I want to let it be known that I love this show and this episode was even better than the first. I hope it continues this way, where I like each new episode more than I did the last. Now, with that spoiler warning out of the way and me saying that I do like the show, let me get into the working parts of the show. One in particular, the idea that there was another Moon Knight in the MCU before Marc Spector came along.
In episode 1, Ethan Hawkes character, Arthur Harrow, is shown to be a cult leader of the Egyptian goddess Ammit. He's out in some small country town enforcing Ammits judgment on the people where they are judged to be good or bad, and if bad then they get what looks to be the life sucked out of them. As the episode progressed we learn that Harrow is not much liked by Khonshu and that Khonshu wants Harrow dead. At first this seemed like Khonshu was upset that Harrow was either using another Egyptian god as a tool for evil or he's upset that Ammit is using a mortal to do her bidding. Either way, what happened in episode 2 was a bit of a surprise.

It now seems like the MCU has had a Fist of Khonshu before Marc Spector came along. Yep, that's right, Arthur Harrow, the man who is most likely the villain in this story, (never know things might change), was once the herald for Khonshu and his vengeance. Now this could be true, Harrow could have once been the Moon Knight before Spector, or it could be that since he has some connection with Ammit or her power, that has given Harrow an insight into Khonshu. I'm hoping it's the former and he was once running around in the suit.
Here's why I want him to once been a Moon Knight.
First off, it gives a good reason as to why Harrow is doing what he is doing and why Spector will be going up against him. With Harrow knowing what it's like to be Moon Knight and the mission given to him by Khonshu, then Harrow not agreeing with it builds the drama. Now we have opposing ideas for the same outcome-ish. Harrow and Ammit want to stop evil from happening but they want to do it by killing anyone for a crime they haven't even committed. Which, like Steven Grant said, killing kids is not good no matter what. On the other side of the coin is Spector/Moon Knight and Khonshu. They want to stop evil but they are doing it after the fact. They are vengeance, that means to get vengeance something has already happened but by getting the vengeance they are hoping that any evil doer realizes what will happen to them if they do the evil and then not do it.

Second off, having another Moon Knight in the MCU means there are now past stories we don't know about. Not only that but it gives more to the MCU that we don't know about and the idea that there is still even more that we don't know about that could come out later. If Harrow was out there in the world he was doing it in such a way that no one knew about him. There's no hint that there was a man calling himself Moon Knight was going around beating up people. Though did he go around saying I'm Moon Knight? Did he even wear the same suit? We saw in this episode that when Steven Grant was in control and summoned a suit, he became Mr. Knight. That now means there's a possibility that Harrow has a different look for himself when he was in the “suit”. Will S.H.I.E.L.D. know about Moon Knight when it was Harrow? Will they even know about Spector being Moon Knight? 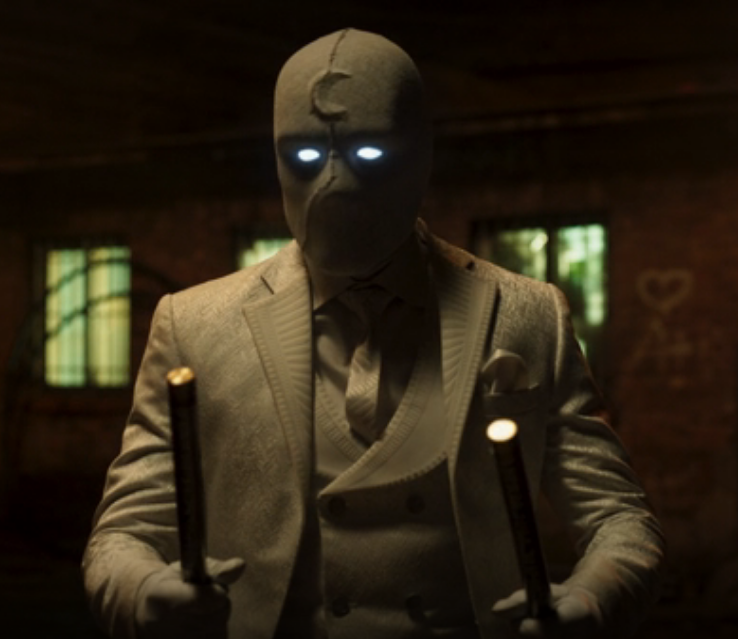 Lastly off for why it's interesting and cool that Marvel made sure to have Harrow a past Moon Knight, it tells the viewers there are more than just Spector. If they had it as just Marc Spector being Moon Knight, then he's the first, he's alone, and there's no backstory. Now we have a backstory and being that Khonshu is very old, like thousands and thousands of years old, there are now many possibilities for other Moon Knight stories and that's just the past ones. Giving another Moon Knight means that there could be a different future Moon Knight. Which is super smart on Marvels end because it gives them a way of keeping the character around while continuing with new shows or maybe a movie. Plus they actually say in episode 2 that Layla is being looked at to be the next avatar of Khonshu. Though I'm hoping they don't make her Moon Knight and kill off Spector with only 6 episodes.