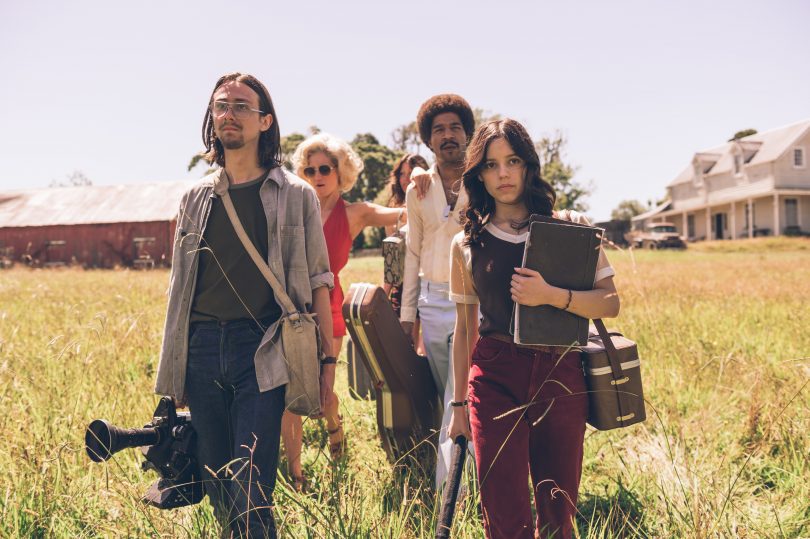 Director Ti West delivers something fresh yet old school with his horror slasher thriller X. The film utilizes many of the themes and tropes of the genre as it the script to deliver a horror film that is gruesome with its kills, all while exploring sexuality and age. It’s everything you want from a slasher, and one of the more fascinating horror films of the year, making X an instant classic.

It’s 1979 and a group of young and attractive porn starts travel together into the heart of Texas to film their own adult video at a farmer’s land they found in an an. Maxine Minx (Mia Goth) along with Bobby Lynne (Brittany Snow) and Jackson Hole (Scott Mescudi) all plan to become famous with this video, at least that what their producer Wayne (Martin Henderson) says. Owners Howard (Stephen Ure) and his wife Pearl (Goth) are unaware of what these folks are doing on their property, but they see their vitality as they remember their younger days. While everything goes well initially, Maxine and her friends soon find themselves fighting for their lives when Howard and Pearl discover what they’re really doing on their property.

From the opening moments, X establishes itself as a homage to the old school slashers. The opening scene it shot from inside the barn and framed to make it look like the film is in the old 4:3 aspect ratio. Only when the camera moves out of the barn does the frame expand to your now standard widescreen format. It’s a fun little nod, one of many that captures a fresh take on an old idea. The first half of the film is reminiscent of sexy 70’s adult films. It cheesy in all the best ways as these actors go about trying to create their own adult film involving a stranger whose car breaks down and the only one around is the farmer’s daughter. And yet Ti West breathes new life into the film by setting up that something isn’t quite right. It’s the perfect blend of sexy and scary, and nothing captures it better than the lemonade scene. 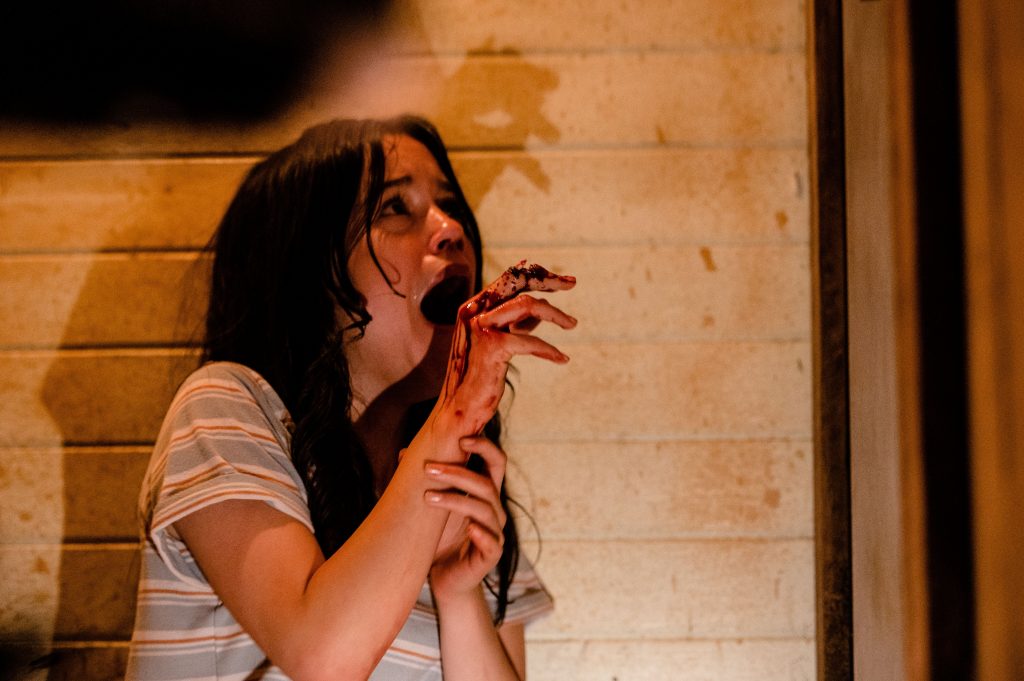 X embraces its sexuality with its whole theme being about how it is expressed throughout various ages. Maxine and her friends are all young and flirty. They view sex as something that’s just fun, and not necessarily love. It’s how Wayne and Maxine can be dating, and he has no problem with her being with Jackson on camera. Meanwhile, Howard and Pearl have been married for decades and while their sex life is practically non-existent, they still deeply love each other. There’s a jealously they have, mostly because these young folks don’t know how good they have it. Pearl in particular wants what they have and will go to extreme measures to take it from them.

Things quickly shift into slasher mode and the kills are absolutely brutal. Once again embracing its roots, X does as much as it can practically with buckets of blood and gruesome methods of extracting it from the human body. One by one, they start to fall to Pearl’s devilish tactics. The standard horror trope is that the couple that has sex first in a film is also the first to die. But when everyone is having sex, X flips the script and have the one person not having sex to be the first to get the axe. It’s just another way how Ti West injects a fresh new look to the genre.

X is some of Ti West’s best work and an instant horror classic. Whether you’re in it for the brutal kills or a fascinating exploration of sexuality, X delivers on all fronts. It’s an engaging slasher that will satisfy everyone.

Director Ti West delivers something fresh yet old school with his horror slasher thriller X. The film utilizes many of the themes and tropes of the genre as it the script to deliver a horror film that is gruesome with its kills, all while exploring sexuality and age. It’s everything you want from a slasher, and one of the more fascinating horror films of the year, making X an instant classic.