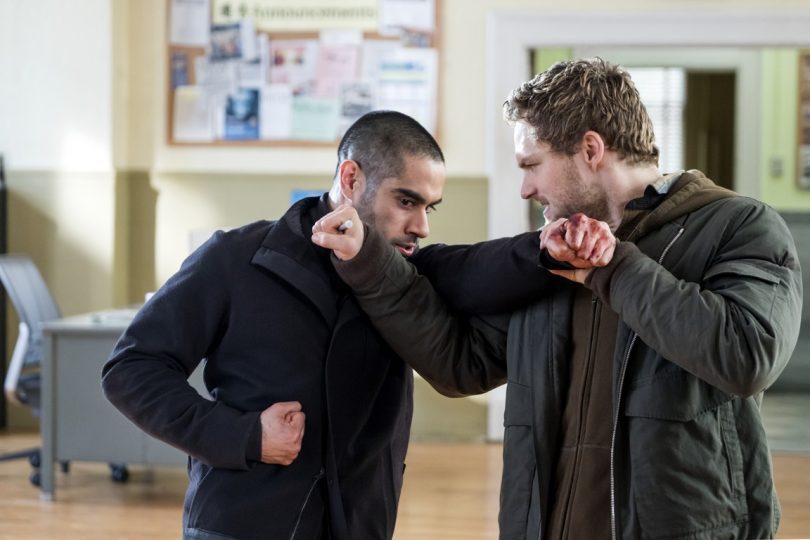 I will admit that Iron Fist is my least favorite of Marvel’s Netflix series. I binged through seasons of Daredevil, Jessica Jones, and Luke Cage, but Iron Fist took me months of on and off watching to get through the whole first season, and that was mostly so I would be caught up by the time The Defenders was released. It was a stepping stone; a means to an end. That all began to change, however, when Season 2 of Luke Cage showcased a less annoying and better skilled Danny Rand for one episode. Its foreshadowing turned out to be a blessing as the new season of Iron Fist is significantly better in nearly every aspect. This time around I’m actually watching as a fan and not to just stay in the loop of the Marvel Netflix universe.

Having watched the first six episodes of the new season, I can say that Danny is actually a likeable character this time around. He’s no longer the pouty, spoiled brat we saw returning to Rand Industries, which takes a backseat and is no longer the focal point it once was before. He’s given up the Manhattan high rises for a more down to Earth job working as a mover in the city. He’s still rich as can be, but he’s not flaunting it about. Colleen (Jessica Henwick) has transformed her dojo into their apartment; family seems to be the focus of this season, without going into spoiler territory. More interesting, Danny is also more in control of the Iron Fist, which brings me to the next improvement.

The fighting and choreography this time around is so much better, although there is still room for improvement. My biggest disappointment with the first season was the action. Iron Fist’s entire power revolves around him being an expert martial artist, and yet the show had the worst action of all the Marvel Netflix series. This time around we actually get to see Danny fight for more than a second with longer fights and less cuts. His glowing Iron Fist is still used sparingly, although I can see that things are definitely starting to ramp up in the second have of the season. It’s also a huge plus that he isn’t telling everyone he runs into that he’s the Iron Fist, protector of K’un-Lun, and sworn enemy of the Hand. The line was run into the ground so much it became its own meme. Then again, can he really say it truthfully anymore since both K’un-Lun and the Hand aren’t around?

Without the Hand to be his sworn enemy, Season 2 brings back Davos (Sacha Dhawan) as the primary antagonist. Davos believes he is the rightful heir to the mantle of Iron Fist and will do whatever it takes to obtain that from Danny. The dynamic between the two former brothers in K’un-Lun is interesting, but like many of Marvel’s other series on Netflix the buildup can be quite slow. There’s a separate plotline involving the various Triad gangs vying for the territory left unoccupied when the Hand was defeated, but it deviates too far from the central conflict going on with Danny and Davos. Also, Colleen gets entangled in a treasure hunt as she tries to trace back a family heirloom to its source. Six episodes in, and the two side stories have been mostly forgettable. Despite a shorted 10-episode season, Iron Fist still feels like it could have been more condensed with less of the side plots and more of the action.

In addition to the better action and slightly better storytelling, there is the wonderful new addition of Alice Eve’s Typhoid Mary. Eve’s performance as the mercenary with Dissociative Identity Disorder absolutely steals the show, and it’s her character that keeps me wanting to come back episode after episode. Like James McAvoy in Split, she’s able to effortlessly change from one personality to another. I can’t wait to see what the rest of the season has in store for her.

Iron Fist: Season 2 is an impressive turnaround for the Netflix series. It’s not perfect and still far outclassed by the likes of Daredevil and Jessica Jones, but it’s no longer a chore to watch. For once, the Immortal Iron Fist isn’t the butt of every joke. The action has improved, the characters are far more interesting, and its story feels like it’s going somewhere this time. I’m actually excited not exhausted to finish the remaining episodes.