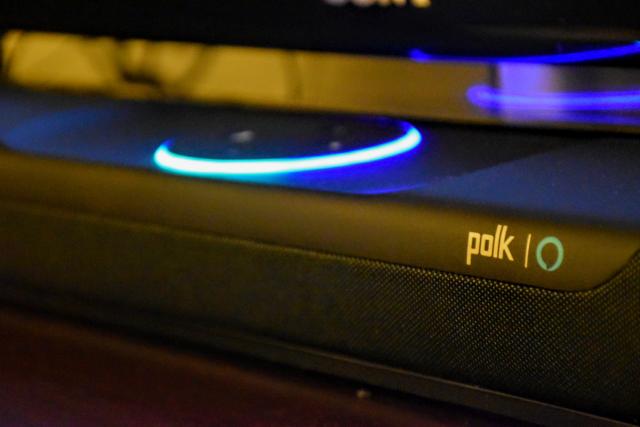 Disclaimer: The reviewer has been compensated in the form of a Best Buy Gift Card and/or received the product/service at a reduced price or for free. All opinions are my own.

Growing up I remember watching The Jetsons and being amazed at their vision of the future; the flying cars, freshly made food at the push of a button, and of course Rosie the robot. While I think flying cars are still a far ways away, technology isn’t really that behind from what I saw as a kid. Smart homes aren’t just confined to television screens or the rich and famous with deep pockets. Technology has advanced to the point where everyone can take advantage of home automation equipment in some capacity or another, even if it’s just to listen to music. Case in point, the Polk Command Bar from Best Buy.

With Amazon Alexa built into the device, the Polk Command Bar works as both a 2.1 channel soundbar for your entertainment system and an Amazon Echo device. Setting up the Command Bar was a breeze with only three cords (power, HDMI, optical) needing to be hooked up from the device to the TV or outlet. After that it’s a simple download of the Polk Command App to finish the setup, and then it’s ready for use.

I’m a gamer so my first real test of the soundbar came when playing my PlayStation 4. I didn’t have any kind of sound system setup previously so to go from my television audio to 2.1 channel audio is a vast improvement. The sound is crisp and clear, but I was particularly impressed by the bass coming from the included wireless subwoofer. I typically keep the audio levels around 50%, which is plenty loud itself. Sure, it’s only 2.1 audio so you’re not getting true surround sound, but you’re not dealing with the hassle of multiple speakers to set up, their placement, and all the wires running throughout the room. The Polk Command Bar fits neatly right underneath your television with ease.

The soundbar is only half the package, however. The real star of the show is the integrated Amazon Alexa. Using the downloaded app, you can connect the device to your Amazon Prime account and start using the Command Bar just as you would any other Amazon Echo device. You’re connected to Amazon Music Unlimited so all it takes is saying “Alexa, play ____” and within seconds you’re jamming out to the latest releases or reminiscing with songs from the 90’s.

You can get creative with your commands, too, letting Alexa customize her own random playlist for you or find some obscure genre of new music worth discovering. Half the fun asking Alexa a question she may or may not know the answer to. One of the coolest things I discovered is that you can command Alexa to set an alarm to wake you up at a certain time to a specific song.

The Polk Command Bar can be as powerful as you want it to be depending on how connected you are. I rent an apartment so my place isn’t exactly smart home friendly, but if you have devices from Nest or Hue or EcoBee you can connect and control them through the Polk Command Bar. It even has its own slot for the FireTV stick. The more technology you have, the more powerful and useful the Command Bar will be, but even at its basic functionality you’re still going to get a lot of bang for your buck.

Disclaimer: The reviewer has been compensated in the form of a Best Buy Gift Card and/or received the product/service at a reduced price or for free. All opinions are my own.