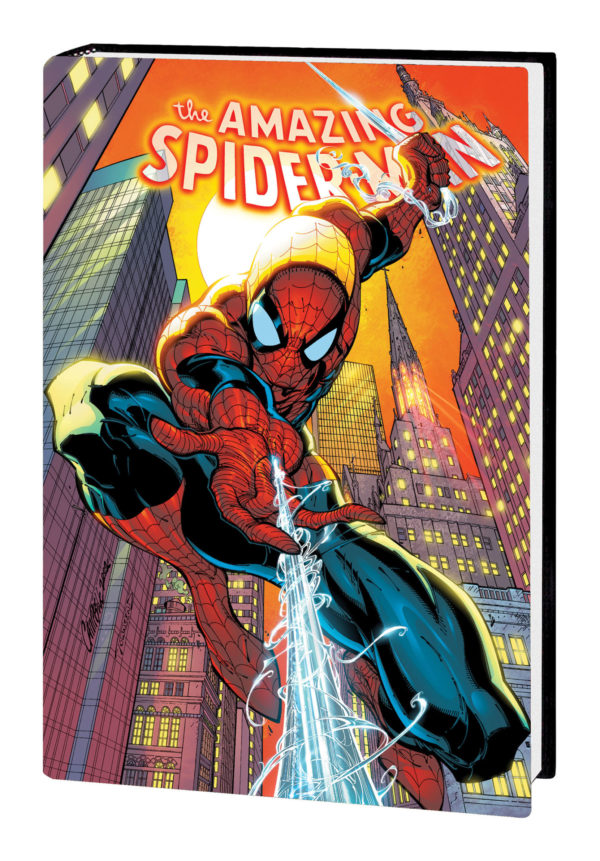 Marvel has put out their solicitations for January 2019 and on the list is a new Spider-Man omnibus. This is the J. Michael Straczynski collection of Amazing Spider-Man that collects some of the worst Spider-Man stories to ever be done. I’m talking about the story that is about Peter Parker making a deal with Mephesto, aka the devil, and how he gave Spider-Man organic webs, but worst of all was the story about Gwen’s affair with Norman Osborn.

Yes, in the story called, “Sins Past”, it was revealed that Gwen Stacy, you know the girl that was Peter’s first true love, had an affair with Norman Osborn, you also know him as Peter’s worst enemy and father to both Peter’s and Gwen’s friend, Harry. Not only did she have the affair but she got pregnant with Norman’s kids, gave birth to twins prematurely, and said twins then appear as same age adults as Peter because, you know, they have blood that makes them age rapidly due to the goblin formula in Norman’s blood.

Did you follow that? Gwen, the one girl that had been Marvel’s wholesome, innocent girlfriend to Peter Parker is really someone who lied to Peter, cheated on him with a man that is old enough to be her father, and then secretly had the children of that man. She also was then going to keep the kids away from Norman, though this is a smart but still also not something you wouldn’t think Gwen would do, and then have Peter raise the kids with her. Was she thinking Peter would just be OK with the fact that not only did his girlfriend cheat on him, she lost her virginity at the same time when she cheated, and she did it with his worst enemy who had been trying to kill him and his loved ones? Did she think he would want to raise the kids like they were his own?

This is the second worst story to ever be written for Spider-Man and it has tainted and hurt the characters ever since. Even with not accepting it and refusing to put it in continuity, the story still runs the Spider-Man mythos through piles of dung expecting it to be clean when it comes out. Can you honestly say you see Gwen in the same was as you did before when you know she lied, cheated, gave birth to illegitimate children to a man who is insane and is twice her age?

Not only this but J.M.S. also involved Mary Jane in the filth. He had her learn of the truth while Gwen was still alive and then have Gwen tell MJ to not say anything. That means since Gwen’s death Mary Jane has been keeping the secret of Gwen’s betrayal from Peter. She now has lied through omission and allowed Peter to continue to think that Gwen was faithful, and that Peter had put Gwen in danger for being his girlfriend. The story now explains that even if Peter wasn’t even dating Gwen, she would have been killed by Norman because she was going to keep his children from him.

If you can’t tell, I hate this time in the Spider-Man history. It will not be an omnibus I will ever buy. Will you?

AMAZING SPIDER-MAN
BY J. MICHAEL STRACZYNSKI OMNIBUS VOL. 1 HC
Written by J. MICHAEL STRACZYNSKI & FIONA AVERY
Penciled by JOHN ROMITA JR. & MIKE DEODATO JR.
Cover by J. SCOTT CAMPBELL
Acclaimed screenwriter J. Michael Straczynski begins a run that established him as one of the all-time Spidey greats — joined by the legendary John Romita Jr.! And they kick things off by introducing an enigmatic stranger with a startling secret about Spider-Man’s origin! Wrestling with his separation from Mary Jane, Peter goes back to his roots with a new job: science teacher at his old school! But how will Aunt May react when she learns Peter is really Spider-Man?! Plus: Spidey battles Doctor Octopus, Morlun, Dormammu and more, and teams up with Doctor Strange, Captain America and…Loki?! And as Spidey copes with the horror of 9/11 and relives his heroic career, shocking sins of the past catch up with the wall-crawler! Collecting AMAZING SPIDER-MAN (1999) #30-58, #500-514 and #509 DIRECTOR’S CUT.
1120 PGS./Rated T+ …$125.00
ISBN: 978-1-302-91706-7
Trim size: oversized