Home » Blogs » ‘Death on the Nile’ Review: A Decent Mystery for a Exceptional Detective

The Agatha Christie cinematic universe got off to an okay start with 2017’s Murder on the Orient Express. The murder mystery film was a great introduction to the magnetic and eccentric Hercule Poirot, but unfortunately lost some steam by the end. Death on the Nile is the second adventure and murder for Kenneth Branagh’s legendary detective on the big screen. And while it delivers a more satisfying ending than Murder on the Orient Express, the film is somewhat disjointed with less interesting characters and and an unnecessary background plot. It’s acceptable, but Hercule Poirot deserves better.

Lavish socialite Linnet Ridgeway(Gal Gadot) has it all; money, looks, and now a loving husband with Simon Doyle (Armie Hammer). While on their honeymoon in Egypt with close friends, however, their fun times are interrupted by Linnet’s former friend and Simon’s former lover, Jacqueline de Bellefort (Emma Mackey). Meanwhile tensions rise all around and old grudges are dug up. Emotions reach a breaking point and what started out as a romantic adventure quickly turns to murder. And with everyone a possible suspect, it’s a mystery that only the great Hercule Poirot can solve.

Death on the Nile actually opens with a flashback to Hercule Poirot’s days in the war and reveals that he was caught in an explosion and severely wounded his face. His signature moustache is what covers his scars. It’s a bizarre and out of place introduction to the film that adds little to the film or his character aside from a few quick but unnecessary scene at the end. It makes me wonder if these two scenes were reshoots and added just to pad out the already lengthy film to an even two hours. I honestly thought I was watching a different film for the first few minutes before Poirot was actually introduced. 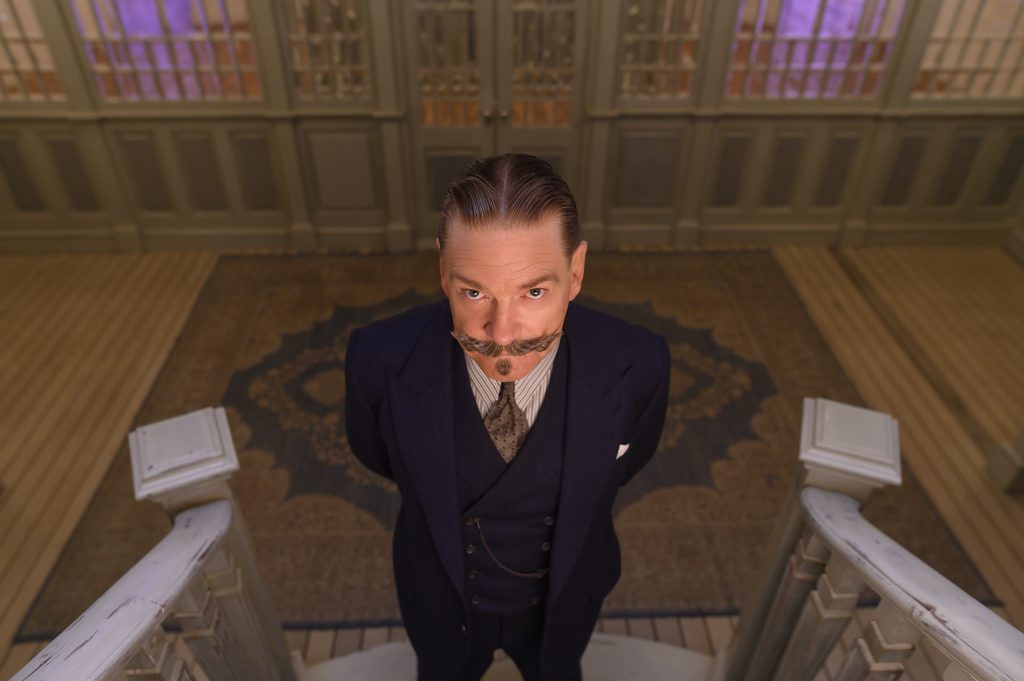 The slowness of the film doesn’t end with Poirot’s introduction. What made Murder on the Orient Express entertaining was its quirky cast of characters. Death on the Nile has a big ensemble cast for audiences to suspect but few of them stand out or are memorable in any capacity. And because there are so many characters involved, there’s little time to spend to get to know any of them. Everyone feels generic. They all just blend into one another. One exception is Russell Brand, although it’s not for what you would expect. He plays a doctor and former lover of Linnet and is by all accounts normal. I’m so used to seeing Brand play these unconventional, off-the-wall characters that it was actually refreshing to see him play someone straightforward. His performance was fantastic and convincing as well.

The film does become more intriguing once the murder occurs, thankfully. It’s not the most difficult mystery to solve, but Branagh’s Poirot at least makes it intrigue. There are twists and turns that complicate the situation further, and the pieces of the puzzle all fit together quite nicely. There aren’t really any surprising jumps to conclusions that come out of nowhere just for the sake of shock value. Even if you’re able to figure out who the murderer is early on, Death on the Nile makes its journey down the river entertaining.

Overall, Death on the Nile delivers a decent murder mystery worth solving. It doesn’t, however, live up to the expectations set forth by Hercule Poirot. Two times now his adventures have been mediocre when his character is anything but that. I long for the day when we get a film that lives up to his potential, but my patience is beginning to wear thin. Perhaps the mystery of a perfect onscreen adaptation is too difficult for even the great detective to solve.

Death on the Nile is the second adventure and murder for Kenneth Branagh’s legendary detective on the big screen. And while it delivers a more satisfying ending than Murder on the Orient Express, the film is somewhat disjointed with less interesting characters and and an unnecessary background plot. It’s acceptable, but Hercule Poirot deserves better.