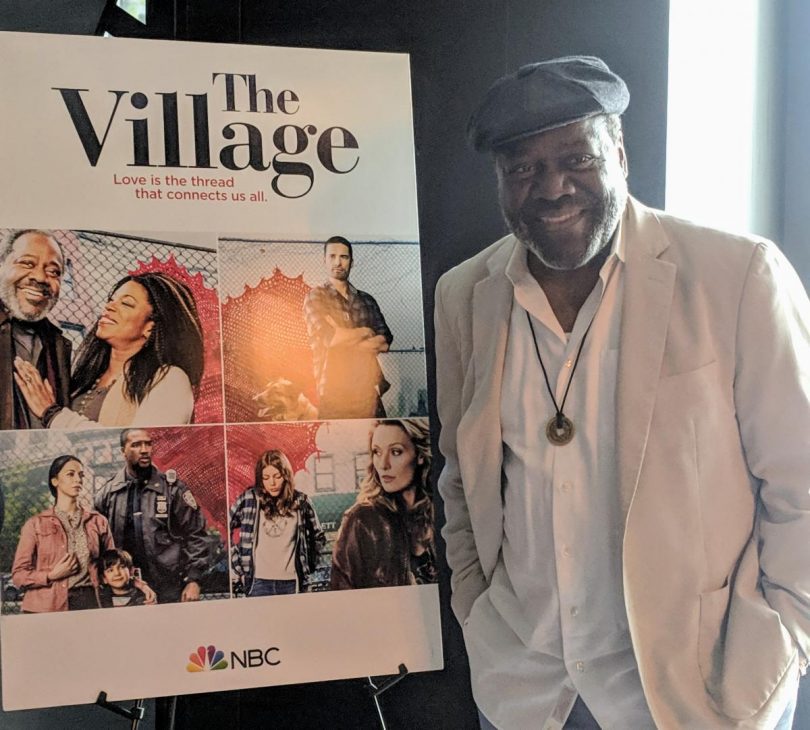 From tiny indie films to big Hollywood blockbusters, Frankie Faison has run the gamut when it comes to his roles, both big and small. While he has a love for each and every one of them, his favorite is also his most recent; Ron Davis on NBC’s The Village. We sat down with Faison to talk about his illustrious career, his latest role, and what it means to have a show like The Village on television.

If you could remember being in the moment of Coming to America, The Wire, White Chicks, did you know at that point in time that you were being a part of iconic films? Did it ever just click for you?
Frankie Faison: A lot of people ask that question. That’s a very good question. My answer is always going to be the same; absolutely…not. Not at all! you just go in there. You have good scripts and you have good people working with you, and you just go in there and do the best that you can do. When you do things that are iconic in nature it’s because of the love and the commitment that you give to them. You’re just in the moment of doing them. Then the after effect, that’s the thing that propels it forward. You don’t have any idea. You just know that you’re doing something that’s important to you and hope it will gravitate with the fans out there and the world in general.

So were you surprised yourself with Do the Right Thing?
Faison: I was very surprised by Do the Right Thing because when we were doing that it was fun to do, especially a film with a predominately black cast and all that. You got Spike Lee there. That one caught me totally by surprise and how it ended up in the iconic nature of that film. I was there from the inside out. We didn’t have a lot of money to throw around on that film, and money does not necessarily make a project a good or bad project. I’m very proud of Spike and very proud of everybody who was involved in that film. I had no idea that that film would resonate in such a powerful way and last so long.

You’ve been in a lot of projects. Do you have a favorite role?
Faison: Probably Ron Davis in The Village. [laughs] I tell you man, it is. I love that guy because with each role that I do, I’m bringing the background of all the other roles that I have done. They feed in; there’s a small part of them somewhere in there. In a way, I think all of the work and roles I do are connected. That’s sort of like my method. But aside from Ron Davis and The Village there’s been so many. When you do these kind of interviews, people bring up stuff and sometimes they bring up stuff I haven’t thought about in years. I can’t think of a role that I just didn’t not like playing. They all come out of me. If it’s not in me then I can’t do it. Sometimes they’re good and sometimes they’re the good parts of myself and sometimes they’re the bad parts of myself.

How would you describe Ron?
Faison: Well, Ron has got some things in his closet that y’all are going to be finding out about. They’re not bad, but they’re…every character has got some stuff and you’ll be seeing it in more detail. To sum up Ron, he’s this happy-go-lucky really loving man who loves helping people, who loves helping his neighbor, who loves caring for the people in his building. He’s a breath of fresh air; he’s a spark of positiveness. It’s hard to find negative qualities in Ron, something that you will dislike.

Ron is the super of the building, but he is also the superglue to the people within the building. Can you talk about getting into that kind of character?
Faison: It’s very easy. They always think of me as a superglue in some kind of way, like I’ve got this thing. I’ll be honest, it makes me very proud because these are based on the foundations I got from my mother and father, from my community, from my village that I grew up in. I like that because I’d like people to see the humor that I have in all that stuff but at the same time to get deeper and understand I’m about love and commitment and bringing people and ideas together. Being a representative of that has been pretty much par for the course for me and my way of thinking. I hope that that continues to sign through because I want people to know that.

With The Village and it being the centerpiece of family, community, and organization, is it challenging that the fact the way the world climate is now where togetherness is frowned upon and what you guys are bringing to television hasn’t been done?
Faison: That is a vital importance. That is what we want. Me, personally I’ve never been a person to get into an elevator and look at the walls and ceiling. I’m looking at the person who’s there. Look, if they’re receptive to a hello, fine. If they’re not, fine. But I’m going to see you and I’m going to embrace you until you give you a reason not to. And that’s what this show is about. It’s about this community who lives in this building and embracing each other, helping each other, saying “how are you?” and really meaning it rather than just giving lip service. If this show can continue along that path and the audience will relate to that I will be the happiest man in the world. I have always been about having a very diverse audience being a part of watching the things I do or the projects I’m in. Universality is so important to me. It’s not important for me for you to say that this a black show, this is a white show, this is a blah blah blah show. It’s a show that includes everybody. These situations and these characters are interchangeable in a lot of ways. That’s very fulfilling.

The Village airs Tuesdays at 10pm ET on NBC.