Home » Blogs » ‘Pet Sematary’ Review: Should Have Stayed in the Grave 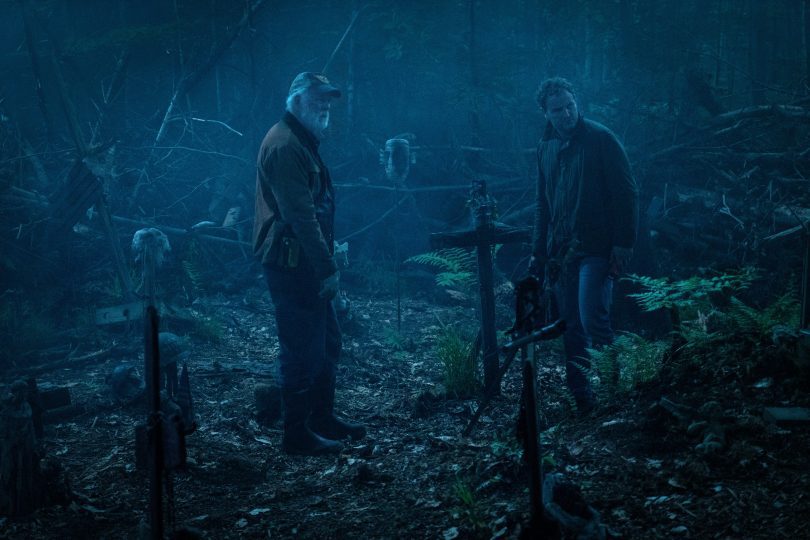 Stephen King adaptations over the years have been very hit or miss. For every IT: Chapter One there’s also a Dark Tower. Unfortunately, Pet Sematary is closer to the latter than the former as it under-delivers on the scares and over-delivers on the foolishness. This is one remake that should have stayed in the grave.

Doctor Louis Creed (Jason Clarke) and his family moved out into the small town of Ludlow, Maine in order to get out of the chaotic city and spend more time together. While exploring their new property, Louis’s daughter Ellie (Jeté Laurence) stumbles upon a “Pet Semetary” that the whole town has been using for generations to bury their beloved pets. When the family’s cat Church is killed by a passing truck, Louis learns from their neighbor Jud Crandall (John Lithgow) that there’s more than just a graveyard on their property and is led to a place deep in the woods where he is told that Church can be brought back to life. It turns out that Jud was telling the truth, although Louis quickly finds out that the newly living Church is no longer the loving cat he once was and that something far more sinister has returned from the grave.

Pretty much right from the beginning, Pet Sematary is a series of one mistake after another, both in terms of the story and the film itself. All I could think of throughout was the scene in Arrested Development where Gob tells Michael that, “I’ve made a huge mistake.” Narrator’s Voice: He did. The film struggles because the characters rarely make rational decisions, with Lithgow’s Jud being the most egregious example. He brought his own dog back to life years ago and then had to put it down when it became “evil.” So when he tells Louis to do the same thing, thinking that maybe it’ll lead to a different outcome, I couldn’t help but shake my head in disappointment. This trend continues throughout the movie, and I get that grief can make a person do some outrageous things, but there’s not much to enjoy when every decision feels like a broken record.

Even worse than the poor decision making is the fact that Pet Sematary is far from being scary. There are a couple of decent jump scares in the film, but everything else feels relatively tame. I could have gone with with bad choices had they led to something terrifying, but that never came. Instead, the film attempted build up the tension with these long and drawn out shots that failed to deliver.

Pet Sematary is ultimately an unnecessary remake that should have remained buried. While it does switch up some plot points of the original source material, there’s nothing particularly exciting or scary about it that makes it worth watching. You should either stick with the original 1989 film or better yet just read the book. Either one will give you a better experience.

Stephen King adaptations over the years have been very hit or miss. For every IT: Chapter One there’s also a Dark Tower. Unfortunately, Pet Sematary is closer to the latter than the former as it under-delivers on the scares and over-delivers on the foolishness. This is one remake that should have stayed in the grave.