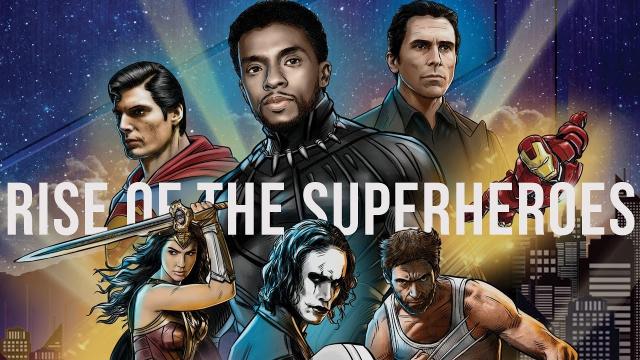 With the release of Avengers: Endgame just over the horizon, the superhero genre is as popular as ever in Hollywood. For many audiences, these films act as introductions to characters who have for a long time lived solely between the pages of a comic book. Now streaming on Amazon Prime and other VOD services, the documentary Rise of the Superheroes explores the origins of some of the most popular comic book characters like Batman, Blade, the X-Men, Superman, and of course the superheroes from the Marvel Cinematic Universe, and traces their development as they make the jump from the comic book to the big screen.

Written and directed by lifelong comic book fan Tom O’Dell, the documentary features interview with X-Men writer Chris Claremont, Batman artist Neal Adams, and many more legends and fans within the industry. “I was 12 years old when Tim Burton’s Batman was released,” says O’Dell, “and for the first time I felt comfortable wearing a Superhero T-Shirt in public! Fans were hidden away in comic book stores for decades, knowing that there was something vital and totally singular about the stories and characters they were obsessed by. It’s taken a different medium, cinema, to show the rest of the world what it was missing. Rise of the Superheroes is a celebration of this remarkable ascent and the phenomenal impact these characters now have on audiences worldwide.”

“This is an outstanding, entertaining documentary film which gives the audience new insights into a phenomenon that has rewritten the Hollywood rulebook,” says Managing Director/CEO of VIsion Films Lise Romanoff. You can watch or purchase the full documentary on your favorite streaming platforms below: