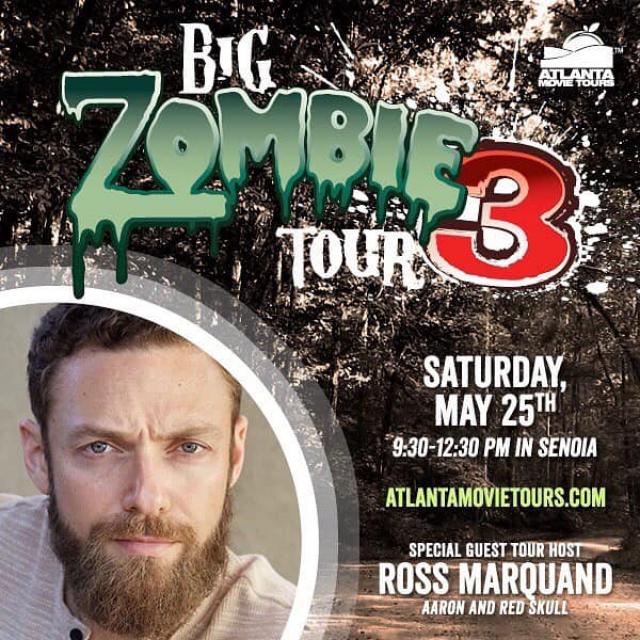 The deadtivities kick off Friday, May 24th at 12pm with their Big Zombie Tour 2 that is being led by IronE Singleton, who played T-Dog on the show, and joining him are the Prisoners from Season 3; Lew Temple (Axel), Markice Moore (Andrew), and Nick Gomez (Tomas). The tour last 3 hours and will include stops at locations used in Seasons 2 through 6 including Morgan’s “Clear” apartment, Hershel’s bar, and the spot where Merle met his untimely demise.

At 2:30pm on Friday, AMT is also having their Big Zombie Walking Tour hosted by The Kingdom’s Richard and Alvaro, Karl Mackinen and Carlos Navarro. The walking tour is an hour long walk through the town of Woodbury and outside of Alexandria’s walls.

On Saturday, May 25th, is the Big Zombie Tour 3 that is hosted by Ross Marquand who plays Aaron on the show. You might also remember him as Red Skull from Avengers: Infinity War and Endgame, too. The 3-hour tour talks fans through some of the more recent locations from Seasons 6 through 9 as well as a couple from Seasons 2 and 3 tossed in the mix including Denise’s death scene, the infamous Glenn dumpster, and Rick’s bridge.

Closing out the weekend on Sunday is the Big Zombie Tour 3 with Pollyanna McIntosh (Anna/Jadis) and her Heapster subbordinates, Sabrina Gennario (Tamiel) and Thomas Frances Murphy (Brion).

Everyone who does any of the tours Memorial Day weekend will receive a signed photo, and official group shots to commemorate the tour. I’ve done both the Big Zombie Tour 3 and their Hero Tour, which features locations from various Marvel films, and have never been disappointed. All of their tours are hosted by AMT Insiders who have actually worked on many of the sets they show you and plenty of others as well so they have a deep knowledge of what it was like filming some of your favorite scenes. Even if you’re not a fan of The Walking Dead, Atlanta Movie Tours hosts other themed tours include the Best of Atlanta Tour, Gone with the Wind Tour, Castleberry Hill Backlot Tour, and Atlanta Heritage Tour. They offer something for all Georgia film lovers.

For more details on the tours and to purchase tickets, please visit AtlantaMovieTours.com.