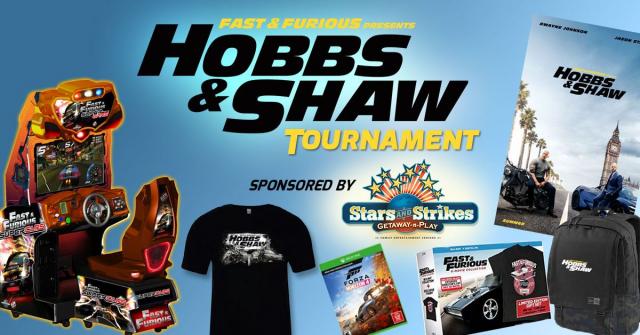 On July 12th, the annual Southern-Fried Gaming Expo being held in at the Renaissance Waverly Hotel and Cobb Galleria Convention Center in Atlanta, GA will host a gaming tournament in partnership with Universal Pictures in promotion of the upcoming release of Fast & Furious Presents: Hobbs & Shaw. Of course the game of choice will be an arcade racing game, with tons of Hobbs & Shaw themed prizes up for grabs including promo items from the film and screening tickets. But the grand prize for one lucky winner will be the Fast & Furious arcade cabinet itself! Imagine having that set up in your living room!?

Individual heat winners during the tournament will have their pick of whichever regular promo item they’d like, and everyone who stops by to play the game will receive either a poster or air freshener *while supplies last*

The overall winner with the best score will win the following:

Check out the Facebook event page for more details. The Southern-Fried Game Expo runs July 12 – 14. To purchase tickets and to see everything that will be happening during the expo, including the Hobbs & Shaw tournament, visit the official website. May the best racer win!