Home » Blogs » How Can She be Worthy if There is no Mjolnir? My Theory. 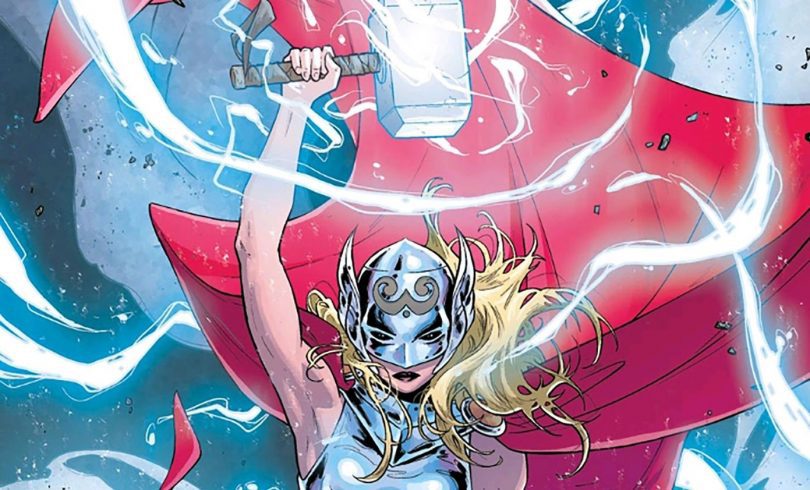 Coming out of SDCC this past weekend is the news that Natalie Portman will be playing Jane Foster as the female Thor in, Thor: Love and Thunder. But wait, I have a question, how? Follow along with me here.

Now Thor no longer has the hammer and has to forge a new one with Stormbreaker in Avengers: Infinity War.

Going back in time, Thor gets Mjolnir to help in the fight against Thanos in Avengers: Endgame but then Captain America returns the hammer.

Now, in the comics, Thor becomes unworthy of Mjolnir and it falls out of his hand. Jane Foster then is able to lift the hammer proving she is worthy and gains the power of Thor. She becomes the female Thor.

Ok, so how is she going to be worthy in Love and Thunder when there is no Mjolnir?

They could do a time travel thing and bring it back again but that’s a cheap way and I don’t see Marvel doing that trick again.

They could forge a new Mjolnir but since Odin is dead in the MCU films there would be no spell put on the new hammer that says you have to be worthy to lift it and gain the power of Thor. Stormbreaker don’t have the spell either, so her lifting it wouldn’t matter. Yes, Stormbreaker is powerful and contains magic, but it does not have the spell of worthiness on it.

So with no Mjolnir and no spell, how would Jane Foster become Thor? I have one theory.

I would lean more towards the hammer coming from another universe. If you read the comics, after the fall of the Ultimate Universe, that Thor’s hammer came to Earth 616 where it sat for a while. The first person to pick it up was Volstagg and he became the War Thor. Which, by the way, I really enjoyed that storyline and wanted more of him that way. He had to give up the hammer and once again it sat until the War of the Realms story. To help fight against Malekith, Jane Foster picks up the Ultimate U’s Mjolnir and become Thor once again. Yes, at the end it is destroyed, and we will be getting a new Valkyrie with Jane Foster, but for this theory, we don’t need to go into that.

With the Doctor Strange movie having the title of Multiverse of Madness, Loki possibly popping around the multiverse, and the What If movie, then why couldn’t they introduce the Ultimate Universe? They touched on different timelines in Endgame, we’ve seen the multiverse in the animated Into the Spider-verse, and even though it might have been a lie, Mysterio talked about a multiverse in Far From Home. Not only could this be a way for Marvel to introduce other characters like Miles Morales and Spider-Gwen but this could be a way that Jane Foster gets a Mjolnir to allow her to be worthy and become Thor.