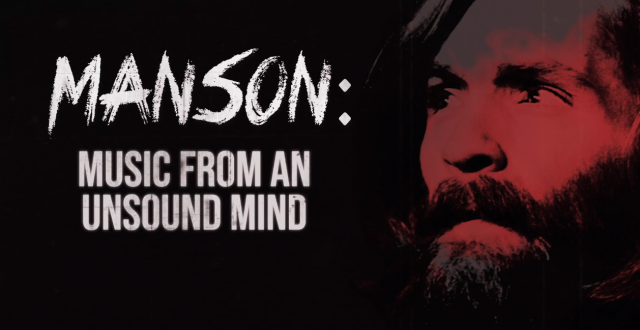 Documentary Manson: Music From an Unsound Mind reveals the astonishing, untold story of Charles Manson’s remarkable rise in the 1960s music world, examines the rock legends who supported him, and shines a light on Manson’s own recordings for the first time. The documentary is now available on all major VOD platforms (iTunes, Amazon, GooglePlay, Vudu, Vimeo, and FandangoNow) and US cable platforms (Comcast, Cox, Spectrum, Dish, Verizon, Frontier, and other affiliates) in North America, courtesy of Vision Films Inc.

When career-criminal Charles Manson was released from prison in 1967 after a ten-year stretch, he headed straight into the heart of San Francisco during the Summer of Love. He had one goal – to become a rock star. The film follows Manson’s journey from the Haight-Ashbury to the Sunset Strip, recording sessions in Hollywood’s most illustrious studios and auditioning for the most powerful figures in the music industry. It reveals the untold story of his musical ambitions, his close friendship with Beach Boys’ drummer Dennis Wilson, and the fear and pain that spread through his Los Angeles contacts once they discovered the darker side of the man they called “The Wizard.” As Manson’s dreams fell apart, it would lead to his descent into violence and chaos.

“Manson: Music From an Unsound Mind dives into Manson’s dream of becoming a musician so we’re focusing on a little known area of his life that has never been fully understood,” said Lise Romanoff, CEO and Managing Director of Vision Films. “It’s a revelation just how close he came to stardom and how closely tied his failure in the music industry was to the murders that made him infamous.”

“I first found out about Manson’s musical ambitions back in 2007, while producing a Byrds documentary,” said writer and director Tom O’Dell (How the Beatles Changed the World, Duane Allman: Song of the South). “It was an unbelievable backstory to a case I thought I understood. We’ve gone back and have interviewed those who were actually there, who believed in Manson’s talent and were appalled by his transformation into a monster. The revelations in this film make the Manson myth more real, more complex and ultimately more tragic.”

Interviewees include Manson Family member Dianne Lake, who joined Manson’s cult at just 14 years old and was arrested with him two years later; Dennis Wilson’s song-writing partner Gregg Jakobson, who became Manson’s closest ally on the LA scene and was a key witness for the prosecution at his trial; Manson’s fellow inmate from 1966, Phil Kaufman, who would release the cult-leader’s only ever album; Beach Boys’ producer Stephen Desper, who recorded Manson at Brian Wilson’s home studio, and Ernie Knapp, the guitarist in Manson’s only ever band, The Milky Way, and many more.