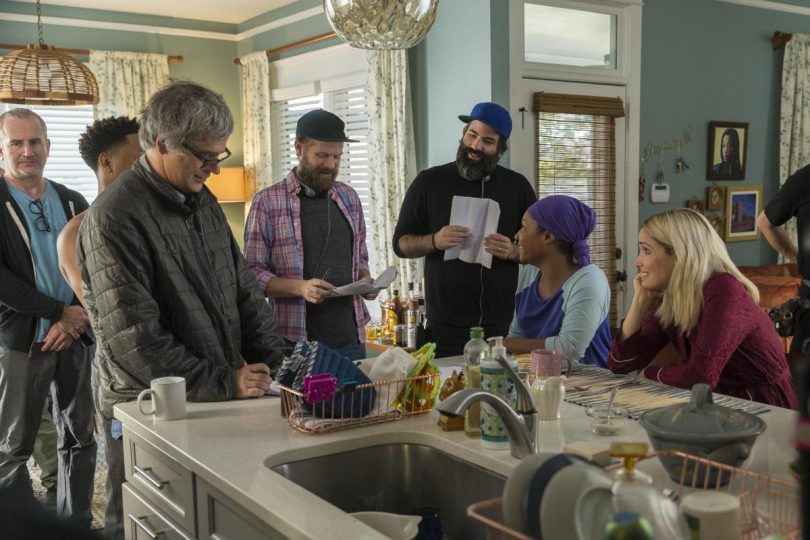 At the age of 23, actor and singer Jacob Latimore has already established himself quite the name in Hollywood, appearing in big YA blockbusters like The Maze Runner and staring alongside A-list actors like Will Smith in Collateral Beauty in addition to playing the main role of Emmett in Showtime’s The Chi. His latest role is that of Harry in Like A Boss opposite Tiffany Haddish and Rose Byrne. In the comedy, he plays the young, sexy, boy toy for Haddish. We sat down with Latimore to talk about what it was like on set alongside Tiffany Haddish and if he’s ever gone into business with friends before.

Tell me about your role in the film. You like to show a lot of skin in this movie. Pretty much every scene you’re in is you with your shirt off.
Latimore: Yeah, it worked out perfectly for me because I was already kinda in the gym. Coming off the first season of The Chi, I was already wanting to look better physically and feel better mentally, you know what I mean? So I was already in that space of working out every day and getting up early. When I saw the shirt off thing I was like, “aight, bet!” I guess it’s what it’s like, when you’re always working out. They always want you to have your shirt off. But I think more importantly than that was just really leveling up to the energy that Tiffany [Haddish] had in the scene because it’s just super fun. I was filming Season 2 of The Chi and then they were like, “hey we got this script,” or whatever. I got the audition, and I self-taped, and I was just like I really want to do this part. I really wanted to do this part. I was asking if they could maneuver the schedule for me to shoot for four days. I was happy I was able to do it.

How does it feel with the roles reversing? Typically it’s girls who play the sex symbols for guys, but you’re Tiffany’s boy toy. How do you feel about that?
Latimore: It’s cool. The Chi was already kinda leaning in that sorta way anyway so that context wasn’t really uncomfortable for me. It was fun; it was all fun. I was just goofy. I tried not to really memorize my lines or nothing like that because I knew she was going to be off book. She was going to throw some stuff at me that was going to make me go, “what the hell you saying?” I just tried to level up to her performance.

How was it working alongside Tiffany Haddish?
Latimore: She’s super cool. She’s super down to earth, super chill. You can tell she’s been grounded for a long time. You get a sense who’s really been at it for a long time when they receive this kinda success now. They’re just kinda living it in now. I don’t know. She just really sees it. I feel like that in my career right now. I’ve been working since I was 9 years old. I’m 23 now so I’m working, working, working. That’s it.

What was it like on set? So many of your scenes are with Tiffany Haddish. Were you ever like, “I cannot break and laugh because I have to be sexy, but what she’s saying is hilarious.”
Latimore: Yeah, there were definitely some of those times, but it wasn’t that much pressure. If you mess up we could just start over and do it again. It wasn’t like a stage play or anything like that. That would have been even harder, to be in front of a live audience and keep up that seriousness. It was just super fun. She just flies off the handle and says anything. And I think after a few takes, stuff is still funny but after a while it’s like, [deep breath] alright, let’s get this scene done.” Maintaining that type of energy throughout the day, throughout each scene, is tough. It’s draining. You’ll be tired at the end of the day.

Were there any scenes of yours that didn’t make the film that you were excited to see?
Latimore: Actually the scene where I’m giving her coffee after her and her best friend have a fight or whatever I’m actually singing in that scene. But I’m glad they cut it out though because the director had this song and I flipped it and changed the melody around and kinda make it make more sense but the lyrics just didn’t make sense. I was just trying to make it work. I sent him a voicemail of it and he was like, “It’s beautiful, it’s beautiful. Let’s shoot it tomorrow. I can’t wait!” I’m like, “ahhh, oh no, Miguel…” So I’m glad they cut that out. Not that I didn’t sound good, but it was just the song didn’t fit.

Have you ever gone into business with a friend like in the film?
Latimore: Naw, naw. I’ve actually always tried to avoid that. I know how even just me with the music business, some people are always like, “sign your friends, sign your friends, sign your friends.” I’m just like naw. I’d rather us link up and market it that way, but I’d rather show them how to get there on their own. I’d rather show them the way I’m doing it and then I can help out. That gets a little tough for me because once money gets involved it ruins friendships. And a friendship is worth more to me than that.

Speaking of your singing career, what do you have coming up this year?
Latimore: I just released a new single called “Don’t Wanna Leave” featuring Mulatto. Then I got a new record dropping next week called Details with a kid named Calboy. His song just went triple platinum; a song called “Envy Me.” He’s actually from Chicago, and I’m releasing the video next week as well. And then The Chi Season 3 2020!

Like A Boss is now playing in theaters nationwide.