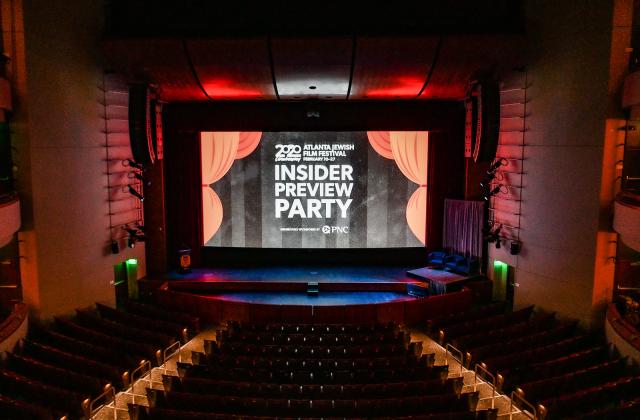 Those are the three words Atlanta Jewish Film Festival Executive Director Kenny Blank would use to describe this year’s lineup of films. Then again, he would describe every year’s festival using those same words. “That is the through line of everything that we do,” Blank told Shakefire at the 20th Anniversary AJFF Insider Preview Party. “So many of these films; they’re thought-provoking, they’re challenging, they get you outside of your comfort zone. They are films that definitely stay with you after you leave the theater and drive home. I think being a catalyst for dialogue in the community is so important. I say community because of course it is the community all coming together and helping to build this thing. And the storytelling because at the end of the day these are just great stories.”

And indeed there are many great stories to be told at this year’s festival, which marks its 20th anniversary. The recently announced programming lineup includes 64 films in total – 48 features and 16 short films – shown February 10 through February 27 in theaters across all of Atlanta. At the preview party, insiders were treated to a showcase of trailers highlighting the diverse festival lineup in store next month.

The festival begins with the world premiere of Shared Legacies: The African-American Jewish Civil Rights Alliance, a documentary that explores the historic relationship among civil rights pioneers in both the African-American and Jewish communities, and it includes many notable Atlanta leaders. It’s the perfect film to kick off the festival Blank tells us. “It’s a world premiere, which we don’t often get at AJFF,” he says. “And it’s a world premiere of a film with so many local ties that have shared legacies and the story of Black/Jewish cooperation and partnerships through the Civil Rights movement and beyond. The film features a number of Civil Rights luminaries who are here in Atlanta. It’s very rare.”

Other films Blank is excited about include Incitement, which was Israel’s submission for the Best International Feature Film at the 92nd Academy Awards. There’s also Hungary’s submission, Those Who Remained, which will be screening as well. “We always have a number of films that are shortlisted or actually nominated for Academy Awards,” he proudly states. “Those entries are really strong.”

Personally, there are a handful of films I’m excited to see. There’s Abe, a dramedy starring Stranger Things’ Noah Schnapp as a kid who explores his heritage through his love of cooking and food. There’s also Alan Pakula: Going for Truth, which dives into the mind of the visionary director and producer behind such films as All the President’s Men, Sophie’s Choice, and To Kill a Mockingbird. Then AJFF is showing Standing Up, Falling Down as part of its Young Professionals Night. The film stars Ben Schwartz and Billy Crystal in a role like you’ve never seen before.

The Atlanta Jewish Film Festival not only looks forward to the future, but also to its past as well with screenings of 1960’s Exodus, Charlie Chaplin’s The Great Dictator, and Edward Norton’s directorial debut Keeping the Faith, which coincidentally was the first I saw on my first date, ever. While I wouldn’t recommend it for 6th graders, I look forward to revisiting it all these years later.

There’s no doubt something for everyone, whether you consider yourself Jewish or not. Nearly a quarter of attendees to the Atlanta Jewish Film Festival identify as non-Jewish.  “People just want to have a great cultural experience and be exposed to different faiths, different international stories, characters from other lands and different walks of life,” Blank explains. “They’re coming to see these films that they can’t see anywhere else.” That is what is so great about the Atlanta Jewish Film Festival and just film festivals in general.

“I have to think this is, and I never want to say “the best,” but one of the most diverse and exciting lineups that we’ve had. It’s just a really great mix of forms and genres.”

The Atlanta Jewish Film Festival runs February 10 through February 27. For memberships and individual tickets and to see the full lineup of films, you can visit their website at ajff.org.