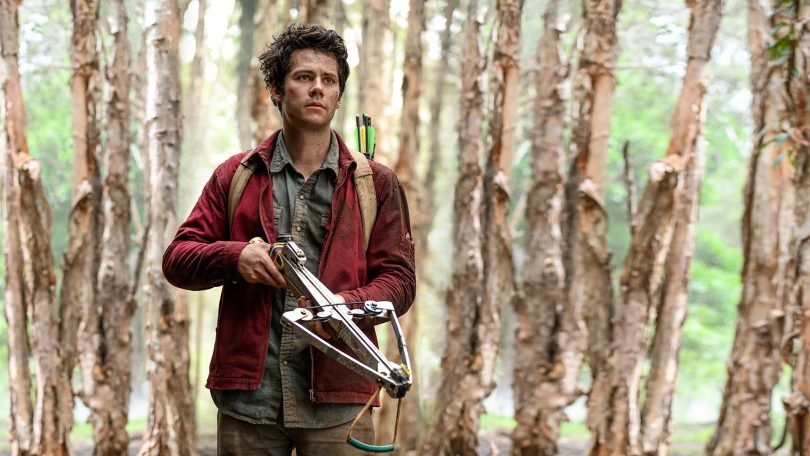 Love and Monsters does for the monster genre what Zombieland did for the zombie genre. It’s a wild and wacky adventure through a post-apocalyptic wasteland filled with crazy monsters and some even crazier characters. It’s a fun film that wonderfully balances action with romance and has a surprising amount of depth to it as well. In short, it’s everything you want out of a movie.

It’s been seven years since humanity was nearly wiped out by their own doing after radiation caused normal bugs and all sorts of creepy crawlers to grow to the size of giants and take back control of the planet. What few people remain have banded together in underground communities such as the one Joel (Dylan O’Brien) lives in. Unfortunately he’s not much of a fighter though so he mostly contributes by cooking dinner or milking the one cow they have. But when he learns that the girl he loved when the apocalypse first began is still alive and only 85 miles away, he decides to venture out above ground and brave the monster-filled landscape to be with her once again.

Love and Monsters excels because it builds this fantastical world that’s filled with an abundance of strange creatures and plants that can kill you in an instant. That’s why nobody ventures above ground unless absolutely necessary. Joel is more of an artist than a fighter so he logs all the monsters he comes across, detailing any facts or weaknesses about them. It’s almost like a video game, with him adding to his collection, and you can’t help but wonder what new creature he’s going to come across next, whether it’s a giant bullfrog that wants to eat him or a beautiful floating jellyfish that just lights up the night sky. I was honestly surprised that the film was based on an original script and not adapted from some other source material, because everything looks like it was ripped straight from a comic book.

On the love side of things, the film seems pretty straight forward at first with its plot of a guy risking everything for a girl, and while the motivations are rather basic, Love and Monsters has a lot of heart to it. For one thing, Joel comes across a dog early on in the film who he aptly names Boy. That alone is worth the price of admission because Boy is absolutely wonderful to watch. There is also a genuine moment where Joel comes across a robot stranded out in the wilderness. The robot is running low on batteries and only has a few moments to spare but ends up having a heartfelt conversation with Joel that is a welcomed respite from the chaos surrounding them. It really says something about the script when you care deeply for a robot who has less than 10 minutes of screentime. Love and Monsters shows love to everyone and everything Joel comes across, no matter how big or how small.

Like Zombieland, I think Love and Monsters is going to be a sleeper hit. It’s got a lot of heart, action, and great worldbuilding, and I hope they continue to tell its story because it’s an open world that’s worth exploring. I have nothing but love for Love and Monsters.

Love and Monsters does for the monster genre what Zombieland did for the zombie genre. It’s a wild and wacky adventure through a post-apocalyptic wasteland filled with crazy monsters and some even crazier characters. It’s a fun film that wonderfully balances action with romance and has a surprising amount of depth to it as well. In short, it’s everything you want out of a movie.