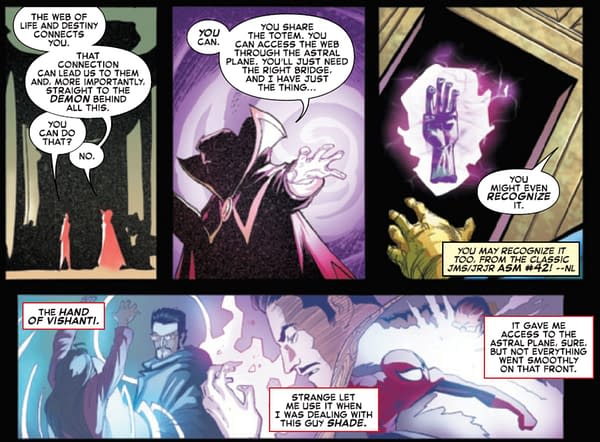 Is One More Day about to unravel? I really hope so because in my opinion it was the worst story idea ever done in the history of Spider-Man. If you haven’t read it, One More Day was written by J. Michael Straczynski and Joe Quesada in 2007-2008. In the story Aunt May is sot and she is about to die and of course Peter Parker does not want this to happen. Trying to save his aunt, Spider-Man goes around asking for help from everyone but no one can help, not even Doctor Doom and the High Evolutionary. Trying to come to terms with the eventual loss of his Aunt May, Peter is confronted by Mephisto and is offered a deal (of course). The deal is that if Peter agrees to never marrying Mary Jane, then Mephisto will turn back time making it where no one knows that Peter Parker is Spider-Man and that means Aunt May will never be shot and she will live. Peter agrees, time changes, no one knows about Peter, Aunt May is alive, Mary Jane is single and not with Peter at all, and Mephisto revealed that the couple would have had a daughter but that now no longer will happen because of the deal.

So here’s why I hate all of that, it’s not what Peter Parker would do. Yes, he has his bad days, he makes bad decisions at times, but he will always do what’s right even if that means he’s hurt by it. Making a deal with the devil, not a mean person, no a cruel person, not a villain, but the devil, is nothing Peter would do (until Quesada). He would have been emotionally scarred and knowing he was the cause of death of yet another parent figure of his, would have been a huge experience that would have changed the character, but until that moment there was never a thought in my mind that Peter would have made a deal with the devil to avoid it.

Which leads us to Amazing Spider-Man #51 (October 28, 2020), that just came out where Peter is dealing with this newest villains, Kindred, (I won’t spoil who he is). But since the events of the last 2 issues of Amazing, Kindred has taken over some of Peters spider powered friends. Right now it’s Silk that he is fighting in the Sanctum Sanctorum with Doctor Strange. Doctor Strange is going to help Peter with this problem but as he begins the spell he’s using does not work. He tells Peter it won’t work and then he questions if Peter has, “ever made a kind of…arrangement…in regard to you..”, and then says it’s impossible and that he needs to investigate it. 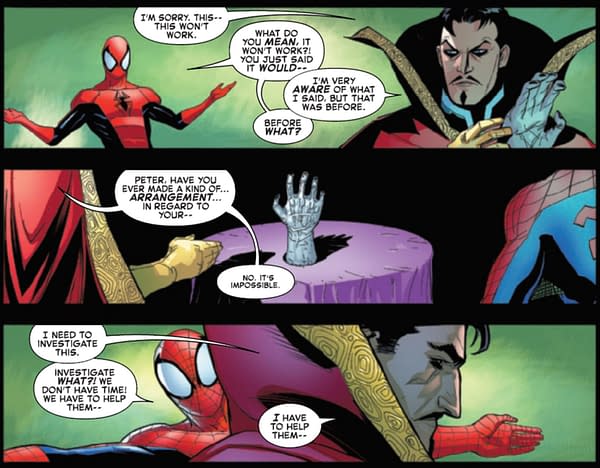 So, is this One More Day coming back to haunt Peter? Seems to be because what other kind of arrangement has Peter made in regard to anything? Also, the true identity of Kindred also played into what happens in the outcome of One More Day, so wouldn’t be surprising that this would be a part of it now.

But what will it be? What kind of outcome will there be in Doctor Strange’s investigation? He won’t be able to change what happened in One More Day, and it has taken nearly 12 years to try to start fixing the problem of no Mary Jane. I mean come on, she’s just as important as Aunt May and even if you don’t want them married, why take her away? For some BS reason saying Peter wasn’t relatable anymore to younger readers cause he was older and married? Uh kids know about marriage. They also know about boyfriend/girlfriend, so why not just put them back to dating? One More Day was a dark dark blemish on Spider-Man and the comic, and if you can’t tell, I have not gotten past it. It was the beginning of bad stories for the character.

Anyways, back to the point, what would change with Strange knowing? Does him knowing mean he will try to change it so that the world would go back to knowing who Spider-Man is? Would the deal that is keeping Peter and MJ apart go away to allow them to actually get married again and have May (Mayday) Parker? Or will it just mean that Strange now knows and is pissed at Peter?