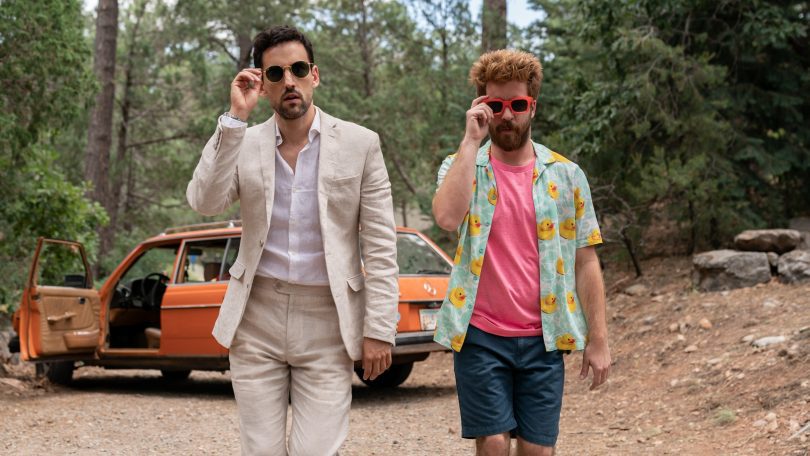 Half Brothers is being billed and marketed as a comedy, but I believe the film works better as a drama that explores the complexity of family relationships than some outrageous road trip between two half siblings. It’s a coin that attempts to stand on its edge, balancing both comedy and drama, but one that ultimately falls drama side up.

Renato (Luis Gerardo Méndez) had a loving relationship with his father as a child growing up in Mexico, but when the recession hit his dad lost his job and made the difficult decision to travel across the border and work in the United States to support his family back home. Despite promising to come back, he never did, leaving Renato to grow up resenting his father but becoming a strong and independent business owner in the process. One day he receives a phone call and learns that his father is on his deathbed and wants to see him one last time. Hopeful to finally get some closure as to why his dad left him all those years ago, Renato learns that he has a half brother, Asher (Connor Del Rio), and his father has prepared a road trip/scavenger hunt for the two of them. If Renato wants the answers to his father’s past, he’s going to have to get along with Asher, who is the complete opposite of him.

The film starts off well showing a young Renato growing up in Mexico with his jokester father who likes to fool around and give his son riddles to complete. Their relationship is heartwarming, but that soon falls apart. As an adult, Renato is a much more hardened and stoic man, which has found him great success in the business world, although he can be very cold with other people. Mexican actor Luis Gerardo Méndez is great in the role and brings a lot of depth to his character. I absolutely hated him at the beginning, although I was curious to see how the film would redeem him, which of course it does.

Half Brothers is nothing special with its story. The whole “road trip film starring two completely opposite characters” isn’t anything new. Due Date anyone? The film follows all the typical story beats you come to expect from the genre. Asher is the goofball screwup to Renato’s straight man. And while Connor Del Rio does a good job with the role he’s been given, the character never quite grew on me and was always that annoying younger brother, even to the end. That’s because the comedy itself is the film’s weakest element.

There are only a handful of times I laughed during Half Brothers and mostly that was just a small chuckle. The film relies too heavily on stereotypes, both of Mexico and of the United States, and takes them to the extreme, especially in the beginning. Every time they punch down elicits a cringe-inducing wince, regardless of who’s making the joke at whichever nationality. It just doesn’t work.

Thankfully the relationship dynamic between Renato and Asher is there to pick up the slack at least a little. The story is a bit strange, since why would a father who is on his deathbed send his two sons away on a scavenger hunt about his life story instead of just telling them face-to-face? But they make it work and keep things interesting, although I will say that the payoff unfortunately doesn’t live up to hype of the journey.

Half Brothers has some good ideas, but lacks the execution to make them great. The drama is good, I just wish the comedy would have been better.

Half Brothers is being billed and marketed as a comedy, but I believe the film works better as a drama that explores the complexity of family relationships than some outrageous road trip between two half siblings. It’s a coin that attempts to stand on its edge, balancing both comedy and drama, but one that ultimately falls drama side up.