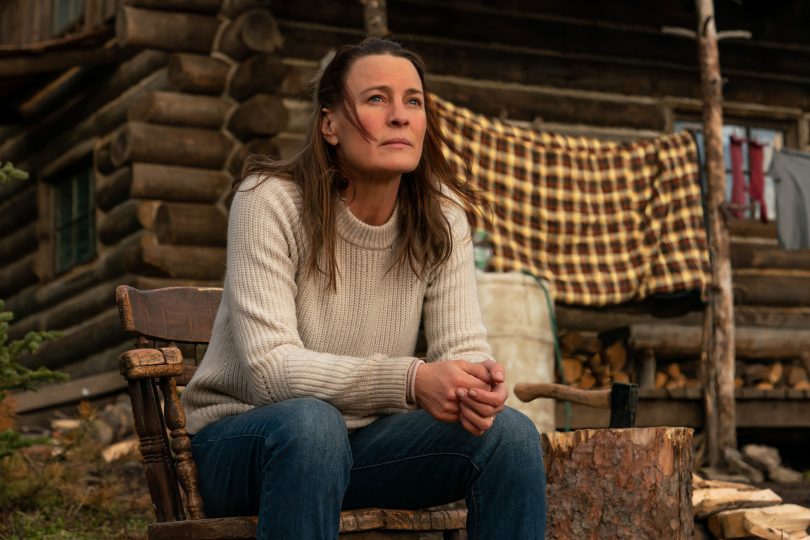 Robin Wright makes her directorial debut with the gorgeous and emotional Land, a film in which she also stars as Edee, a woman in search of herself after a tragic accident takes the lives of her family. It’s an intimate film filled with lush landscapes and a powerful and captivating performance from Wright.

Following a tragic accident, Edee decides on a whim to leave her old city life behind and move into a cabin out in the wilderness to get away from people and live solely off the land. With next to no experience, she quickly finds out that she’s in over her head and that nature can be more harsh than she expected. After a particularly brutal snowstorm leaves her for dead, she is lucky to be found by local hunter Miguel (Demián Bichir) and nurse Alawa (Sarah Dawn Pledge), who nurse her back to health. Despite an initial reluctance, she agrees to be trained by Miguel to properly live off the land, and the two develop a close bond despite their minimal interaction. But if Edee is truly going to survive, she’s going to need to confront the trauma that pushed her to the wilderness in the first place.

Land explores survivor’s guilt on an intimate level and looks inward to the soul through Wright’s Edee. Not only does she need to survive the brutal weather of mother nature outside, but she has to find herself inside as well. Even though she tells Miguel that she’s moved to the cabin because it’s what she wants and that she’s not running away from anything, it’s only the half truth. The film does struggle in its depiction of Edee before she decides to leave everything behind. There are a handful of scenes between her and her sister Emma (Kim Dickens) but they only tend to make you question Edee and her leaving without so much as a goodbye. It’s understandable that she would want a new life after experiencing something so tragic, but clarifying some of the lingering plot elements would have gone further in strengthening her decisions.

That being said, Land is beautifully shot and edited. The vast and empty landscapes often paired with a soothing and crackling score make for an enjoyable visage when things stop to breathe for a moment. That, in turn, makes the harsh rain and snow feel exceptionally devastating at times. The shift between the beauty and brutality of nature is wonderfully done.

Land is well worth watching, although there is definitely room for improvement for Wright’s direction. It’s a solid directorial debut, and there’s a lot of love throughout the film, both on screen and behind-the-scenes.

Robin Wright makes her directorial debut with the gorgeous and emotional Land, a film in which she also stars as Edee, a woman in search of herself after a tragic accident takes the lives of her family. It’s an intimate film filled with lush landscapes and a powerful and captivating performance from Wright.