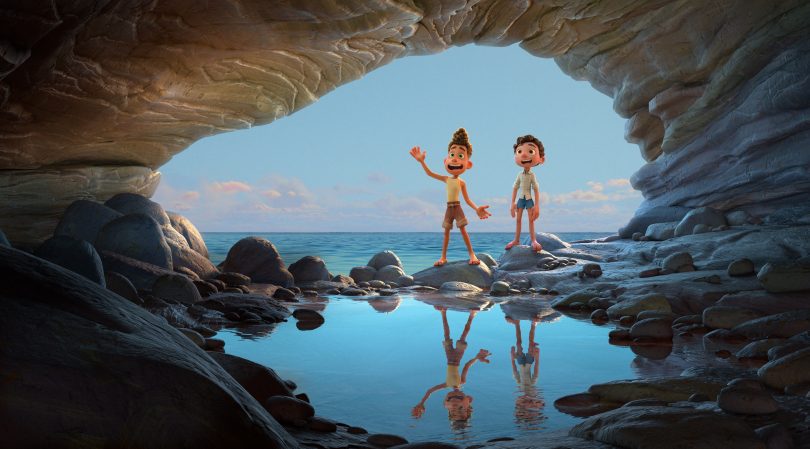 At the heart of every Pixar movie there is a deep love for something that drives the film and story. For Soul it was jazz. For Onward it was family. Pixar’s latest animated adventure Luca has friendship at its core, delivering the feel-good movie of the summer that will warm your heart with its enveloping rays of lighthearted fun. It won’t break your heart like many of Pixar’s other offerings so often do, but Luca is simply bellissimo.

Luca (Jacob Tremblay) is a young sea monster who lives in the ocean on the outskirts of a small seaside town on the Italian Riviera. Spending his days herding sheep fish, Luca dreams of venturing to the human world despite the deadly warnings from his overprotective parents. He finally works up the courage to go outside of the water when he meets Alberto (Jack Dylan Grazer) a fellow sea monster who often explores the outside world and does pretty much whatever he pleases. The two quickly become friends and spend the summer above the water where they enter a race that can win them a Vespa, which they have dreamed of owning so they can further explore the world together.

Summer is a magical time when you’re a kid. School is out and there’s nothing on your mind except deciding on what fun adventure to go on with your friends on any given day. Luca beautifully captures that feeling of discovery and friendship. Both Luca and Alberto are fascinated by the human world, particularly with Vespas. Their summer begins with the two of them spending their days building their own based on the magazine pictures they’ve seen. After a few test drives and real crashes, they venture to the nearby human town to continue their summer exploration where they meet Giulia (Emma Berman), a passionate and driven girl who has her own dreams of winning the annual Portorosso Cup race, despite never really coming close in previous years. The three new friends decide to team up together and spend the rest of the summer training so they can win; Giulia for the fame and Luca and Alberto for the prize money so they can buy a Vespa. The love and support they all have for each other and their collective dreams is so very heartwarming. There’s never any doubt that their feelings aren’t real or valid.

Then there’s also the fact that Luca and Alberto are sea monsters and have to hide who they are from the rest of the humans. While on land they transform to look like normal boys, but if they so much as get a drop of water on them they transform back into their monster form, leading to some comical situations in which they go the extra effort to avoid any liquids and stay dry. It’s all quite charming, especially when Giulia’s cat becomes suspicious of them after catching them in the middle of their transformation one time. But Luca and Alberto are there to support and look out for each other. So long as they have each other’s back, anything seems possible.

Like with any Pixar film, Luca is a gorgeously stunning work of art that captures your eyes from its first moments. The film prefers a more cartoonish over realistic look with characters, both human and sea monster, having more exaggerated features. The world they populate looks like it’s been painted with a colorful brush, with every scene packed with warmth. The city itself is packed with detail too, from the various shops to the building architecture; Luca will make you immediately start looking at flights to Italy afterwards.

Luca is another fine film from Pixar who once again delivers a strong story that is grounded by its emotional relationships. It will make you long for those summer days that felt like they lasted forever, a time when you thought that friendships would last forever too. Luca will leave you savoring every moment.

At the heart of every Pixar movie there is a deep love for something that drives the film and story. For Soul it was jazz. For Onward it was family. Pixar’s latest animated adventure Luca has friendship at its core, delivering the feel-good movie of the summer that will warm your heart with its enveloping rays of lighthearted fun. It won’t break your heart like many of Pixar’s other offerings so often do, but Luca is simply bellissimo.