Home » Blogs » ‘Black Widow’: The Red Guardian and Who He Fought; True or False? 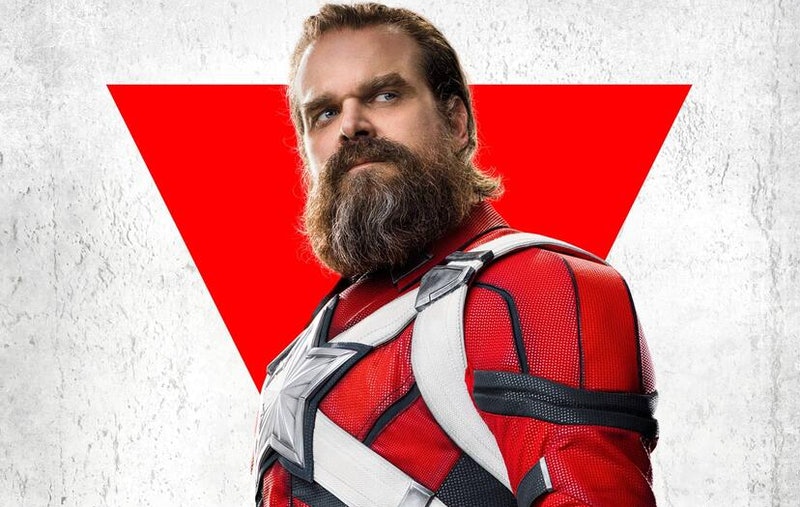 When we first see Alexei, aka the Red Guardian, it is in the 90s but then years later we find him in prison where he’s been there since the 90’s. As he sits there arm wrestling he is telling a story about how he fought and beat Captain America. One man, Ursa (this is a nod to the Winter Guard and Ursa Major who can transform into a bear and Alexei calls him “Big Bear” in the movie), makes a comment that Cap was still frozen in ice during the time that Alexei is saying he fought Cap. Alexei then breaks his arm because of that but the point was made, Alexei is lying.

After he is busted out of the prison, he asks Natasha if he talked about him. Meaning did Cap talk about Alexei to Natasha. Though Natasha most likely never told Steve about her time as a kid who was used as a cover for Russian spies in the US or that her surrogate dad was that spy. She also might not have known that Alexei was the Red Guardian. She was a young kid at the time and though the girls knew a lot, that does not mean that they knew he was a super solider for Russia. Factor in that she might not have known he was the Red Guardian (though at time of adult she probably discovered it) and she probably didn’t talk to Steve about her time as the kid spy, then even if Steve had talked about fighting a strong Russian, Natasha wouldn’t have connected the dots to Alexei.

But back to the original point, when he was busted out of prison, Alexei asks Natasha about Captain America talking about their fight. In this brief dialog Alexei really does seem like he believes the fight happened. I can understand him lying in prison about the fight but why would he continue with a story about him fighting Captain America to a person he knows for a fact has worked with Captain America? If he is asking her if Cap talked about him, then Alexei has to figure that if he was lying then Natasha would call him out on it. So the question comes back to did he really fight Captain America or has he told the lie for so long that he now believes the lie?

Lets say it’s true, he fought Captain America, then who was it? I have a few ideas of how this might be true.

1) It’s a lie. Ok yeah I know I just said that it might be true but what I mean by it being a lie is not that the lie comes from Alexei. It could have been that the Red Room or some other group for whatever reason set up a fake Captain America to fight the Red Guardian. Being a fake Cap he would of course lose to the Red Guardian, Russia’s own super soldier, proving that their solider was better than America’s. Alexei would not have been told and everyone would think that the Red Guardian did actually fight the real Captain America and won. Basically, propaganda.

2) He fought someone that was a test subject. Maybe the Red Room program with Melina working on her mind control drugs as they also worked on the prototype of the chip used on Taskmaster, they make Alexei think he was fighting Captain America. It would make sense to test out these projects and what better way to test out if a person with a chip that can mimic others saw old WWII footage of Cap that allowed him to fight the same way and so Alexei believes he fought Cap.

4) He fought Steve Rogers time traveler. We know that Steve goes back in time and stays in a timeline (still not on board him going to an alternate timeline but that whole old man Steve throws me off, the serum is supposed to slow his aging down by a lot, so when he was frozen he had not been Cap for long, then when unfroze he was only Cap for 12 years by the end of Endgame, so maybe 13 years with the serum, so if aging is half the rate he aged 6 years, so by the time he went back in time and stayed he would aging wise 6 years with the serum and he was mid 20s at time of taking it, then after staying around for 78-80 years but he’s only aging at half the rate then by time he made it to Endgame he would be aged by 40 years and even if you add from when he took it and the fact he has the serum that keeps his muscles fit, he would look around his 50s not looking his 80s 90’s) but anyways. Alexei could have fought the time traveling Steve. With Peggy Carter still working in SHIELD, she might have heard of the Red Guardian and told Steve about him and so Steve took it upon himself to go see about this so called Russian super solider.

So those are the ways that I think that Alexei could have had a fight with Captain America at the time that he was frozen. To me, this was the most interesting part of the whole Black Widow movie. There are some other moments I liked, mostly though I was not impressed with the movie, but that’s for another article to talk about.