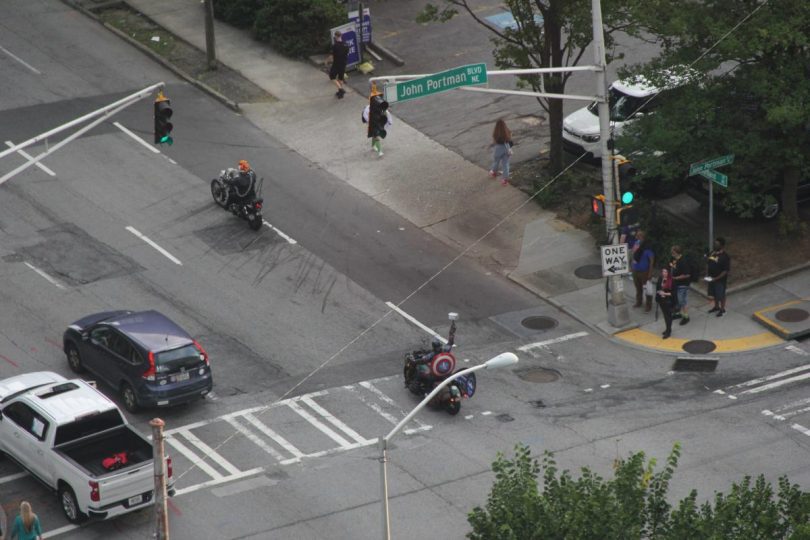 Dragon Con 2021 has now come and gone for another year. It always passes by so fast that it really does feel like by the time I’ve unpacked in the room I’m having to pack up to leave. This year was even worse when it came to the time flying by, for me at least. COVID has played a number on the whole world and one of the things it did was stop the convention scene. After having to wait 2 years, getting to be at Dragon Con this year went by in a blink. I thought that maybe it would seem to last longer by me cutting down the things I normally do, it didn’t.

I want to say that the people that worked Dragon Con did an astounding job at trying to keep people safe. Having to have a negative test and/or your vaccination card was something that I appreciated a lot but it went beyond just a surface check. The mask policy was another step taken to keep us safe and from what I saw while at the convention, people kept their masks on. Though, I was not too worried about this area. I told this to other people before going to Dragon Con, this is already a place where people wear masks as a form of clothing so having to wear it for safety is almost like asking if you will put your seat belt on when driving. There was also people that had special printed masks to show their love for something while some were the plain functional ones, like my own. The point is, people wore them.

One of the most impressive I think was how the parade was handled. Normally, the parade is open to anyone and everyone that wants to come out to watch. This year it was only for people with a Dragon Con membership badge. No badge, no parade watching from street for you. This kept the crowd down and kept it safer. I’m sure there were probably some people without badges that snuck in the parade, but for the whole, it was only people that had proven they were vaccinated or negative.

Then there was the cleaning that was being done. I saw hotel workers cleaning and spraying, and Dragon Con workers were working to keep the area clean. Panels were smaller in the amount of people let in but more impressive were the people not trying to fill the rooms. Having the convention passes limited was another great idea and it was noticed how it did help. I heard a few times in passing and in a conversation, that people would like for Dragon Con to keep the cap on the number of people coming to the con. Most of the people wanting this said that it was so nice having space to move around and get around. I can say the rooms were less full, the vendor walkways were actually walk-able, and even the elevator wait time wasn’t that bad. However, I’m not one for this limited amount. This time, yes, but this time is under different circumstances.

Having a limited number of badges for the people would pose a few problems on both sides of the con. Lets start with the attendees first because they would be the ones speaking out for it. Having limited number of badges for the con means harder to get the badge. Saying you were able to get it this year and it was limited does not mean it will be the same next year or year after. 2021 is different because there were a lot of people who would normally be at the convention not attending.

Whether it was because they didn’t want to get the shot, get the test, or just take the chance of attending, they didn’t attempt to get a badge. When it changes back to being able to attending by just buying a badge without having to prove anything, then count on so many more people wanting to get a badge. Now if there is a limited number on the badges, say for example, 25k badges but 75k people want to go. Well, good luck at getting one then. I don’t want to have to fight for my badge. Then having it cut down means the fewer the people there to cosplay.

For the hosts of the convention, the limited amount of people showing up means less money gained. I don’t mean in their pockets but for putting on the convention. Nothing in this world is free, especially a convention. Everything you see, do, and getting to attend costs something from someone. If you cut the number of people attending, that money will have to be made up for so that the convention can still be held, so where is it coming from then? Badges. Now do you want to pay double or more then what you do for a badge to have a bit more room walking around? I sure don’t. One thing to remember, Dragon Con is unlike any other convention around, and I don’t mean that because I love it the most, but because almost every single other convention is held at convention center. This means when the con is over for the night, then it’s time for you to go home. Dragon Con is 24 hours, maybe not the vendors or the walk of fame, but the panels, the parties, the concerts, games, photoshoots, and so much more is 24 hours. Then if you don’t want to do any of that, there are still the lobbies in the host hotels that you can go to just to stand and watch all the cosplayers.

So, for now, 2021 was great on the cut on number of badges, but it was worth it. And for now I will end this article because this one was me explaining that it was a great year for the con under the circumstances we are under. I will be posting some photos as soon as I can and other posts about just the fun from the con. I didn’t do as much as I normally do but I still had fun doing it. Thank you Dragon Con and all the people that made it possible.