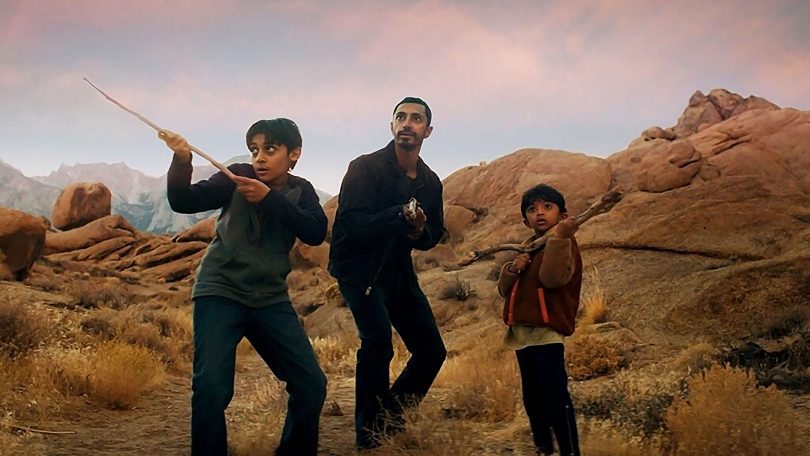 Following last year’s outstanding performance in Sound of Metal, Riz Ahmed is now stepping into the combat boots of an army veteran who does whatever it takes to protect his sons from a parasitic alien invasion that has supposedly taken over the earth. Encounter is part science fiction, part psychological thriller, and while the story never fully embraces one or the other, Ahmed’s performance, along with those by Lucian-River Chauhan and Aditya Geddada, make the film worth watching.

Malik Khan (Riz Ahmed) has not seen his sons for the past two years, telling them that he’s been away on a secret military operation. Then one night he suddenly shows up and tells them that parasites have infected most humans, including their mom, and that they need to drive to the only army base that is free from the infected. As they get closer and closer to their destination, however, the situation gets more and more dangerous and perceptions begin to shift as the situation becomes more unsettling.

The plot behind Encounter is pretty minimalistic. The parasites presented in the film are nearly invisible; tiny worms that get under your skin and can only be seen in your eyes, which is how Malik determines who is infected or not. Of course that’s only one part of the story, though. As things progress, we get to see events unfold from other perspectives, including Octavia Spencer’s Hattie, Malik’s parole officer. This helps unravel what is really going on, although it’s not too difficult to figure things out on your own. That’s not the point of Encounter.

The other half of the film focuses on its psychological aspect and Malik’s own trauma and PTSD from being in the Marines. This is where Riz Ahmed’s performance shines. It’s clear from the very beginning that something isn’t quite right, whether it’s alien parasites or something else. Ahmed delivers a great performance that allows the audience into his mindset. He clearly has love for his two sons, Jay and Bobby, and wants to protect them from any and all dangers. At the same time there are moments where he loses control and lashes out, which can be frightening. Ahmed is always captivating, and both Lucian-River Chauhan and Aditya Geddada complement his performance with wonderful ones of their own. They’re just kids who trust in their father. It’s both heartwarming and heartbreaking to watch.

Encounter is equal parts a sci-fi story and exploration of mental health. The biggest issue with the film is that it’s too middle of the road and doesn’t say much when it comes to either. It’s not science fiction enough for those who want a good alien thriller, and it’s not psychological enough to really get into the depths of dealing with Malik’s trauma. Everything feels too by-the-book and therefore the film can be boring at times. There’s not much we haven’t seen being told before. In addition, Oscar-winner Octavia Spencer is woefully underutilized in her role, taking a backseat (both figuratively and literally in the film) as she mostly just watches from the sidelines.

That being said, Encounter is worth watching for its actors. Riz Ahmed alone delivers a compelling performance from an average script. I wouldn’t say it’s worth going to the theaters for, but definitely check it out when it hits Amazon Prime Video next week.

Encounter is worth watching for its actors. Riz Ahmed alone delivers a compelling performance from an average script. I wouldn’t say it’s worth going to the theaters for, but definitely check it out when it hits Amazon Prime Video next week.