Home » Blogs » ‘Being the Ricardos’ Review: Story Bigger than its Stomach can Handle 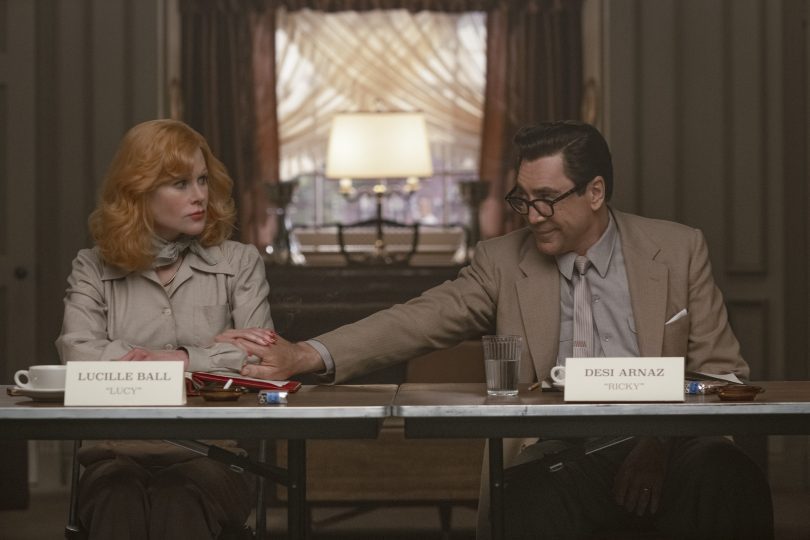 The I Love Lucy sitcom was about as big as television shows get in the 1950s. Tens of millions of people would tune into their televisions every Monday to see what hilarious hijinks Lucy Ricardo and her husband Ricky would get into that week. But the real life married couple of Lucille Ball and Desi Arnaz was hardly the slapstick nature portrayed on TV sets across the country. Being the Ricardos tells the story of what it was like when the cameras weren’t rolling and the troubles of making the most popular and influential television show of all time. Both Nicole Kidman and Javier Bardem give riveting performances, but the larger than life persona of Lucille Ball ultimately proves to be too much to handle.

Being the Ricardos chronicles a particular week of production on the I Love Lucy show where controversy over rumors of Lucille Ball (Nicole Kidman) being a communist threaten the future of the show. At the same time, Lucy and her husband Desi (Javier Bardem) are going through troubles of their own as Lucy has doubts over Desi’s faithfulness to her. While production of the show continues forward as usual, everything happening behind the scenes will either make or break what could possibly be the final episode of the show.

Fans of Aaron Sorkin will be pleased to know that Being the Ricardos is full of his usual snappy dialogue. Even though a majority of the story takes place during a single week of production, going from the table read to the dress rehearsals and finally ending at the live taping, the film flashes back to the early days of Lucille and Desi and the origins of the show. The entire thing is also presented in a documentary-like fashion with interviews with older versions of the main cast. It’s a somewhat bizarre framing structure, as if Sorkin wants to bring more authenticity to his story by having people look back and comment on what went on during that week. These interview scenes don’t really add anything to the film, especially since they’re not actually real interviews so it’s just Sorkin re-enforcing what he already wants to show.

The highlight of Being the Ricardos is both Nicole Kidman’s and Javier Bardem’s performances. While we only get glimpses of Kidman playing the character of Lucy Ricardo, she absolutely shines as Lucille Ball. Watching her navigate production of the show, the media, and her own marriage all at once. She’s steadfast in her regard and always trusts her own instincts first. During production of the upcoming episode, Lucille is constantly changing and reworking this one dining room table scene in the script. It becomes an infatuation for her and something that she cannot move past, despite everyone else pleading for her to move on. And yet she ultimately makes the scene better. At the same time, Javier Bardem delivers an electrifying performance as Desi, a Cuban movie star who was influential in the success of the show as well as changing the television industry as a whole. This also brings me to my biggest complaint about the film; the fact that production couldn’t cast a Cuban actor in the role.

While Bardem delivers a fantastic performance, I still find it hypocritical of Sorkin and casting that they couldn’t find someone Cuban to play Desi. It’s not like they were unaware, either. There’s an entire scene in the film where Lucille attends a meeting with the studio and makes her case for Desi to play her husband in the show where the studio head refers to Desi as Spanish and not suitable for being her on-screen husband. Lucille is quick to correct him and explain why. It’s a powerful scene that is overshadowed by the fact that this is exactly what Sorkin is doing with his film. By casting a Spanish actor in a Cuban role, especially since Being the Ricardos so heavily references his Cuban ancestry and impact, it undermines everything it sets out to accomplish. Bardem is great in the role, I just can’t help but imagine what it could have been.

Being the Ricardos is a fine film that features some wonderful performances from its cast, but its story is bigger than its stomach can handle. There are a handful of things that keep it from being truly great. I may love Lucy, but I only liked Being the Ricardos.

Being the Ricardos is a fine film that features some wonderful performances from its cast, but its story is bigger than its stomach can handle. There are a handful of things that keep it from being truly great. I may love Lucy, but I only liked Being the Ricardos.