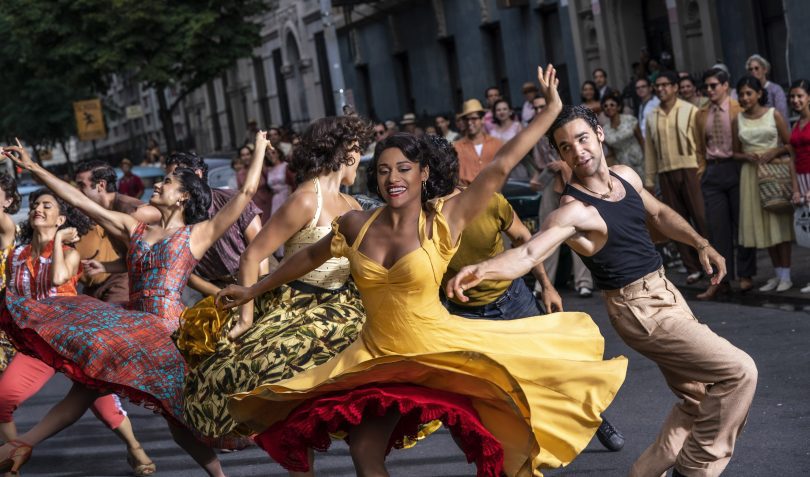 West Side Story is an absolute classic, whether you’re talking about the original musical or the 1961 film adaptation so it’s no surprise that Hollywood would eventually get around to remaking it once again. 2021 has been the year of the musical with plenty of song and dance numbers available to suit anyone’s tastes; In the Heights, Cyrano, tick, tick…Boom!, the list goes on. Closing out the year is Steven Spielberg’s adaptation of West Side Story and while I couldn’t have been more excited to see his vision of the musical, the film left me with an empty feeling of an unnecessary remake but also a greater appreciation for the original material.

Inspired by Shakespeare’s Romeo & Juliet, West Side Story tells the tale of two teenagers, Tony (Ansel Elgort) and Maria (Rachel Zegler) who fall in love but belong to rival gangs on the streets of 1950s New York. As members of the Jets and Sharks fight each other for control of the Upper West Side, Tony and Maria hatch a plan in secret to escape the boxes life has placed them in and follow their own path together with one another.

Spielberg’s West Side Story isn’t a modern version of the musical, but rather just his own cinematical spin of the same story set within the same time period with a few updated changes here and there. For the most part, it follows the same narrative and musical structure as the stage production and original film. The biggest change, and vast improvement to the film, is the casting of Rita Moreno as Valentina who replaces Doc from the original and acts as a bridge between the Jets and Sharks where her drugstore works as the neutral zone for meetings and such. Moreno, having won the Oscar for Best Supporting Actress as Anita in the original West Side Story, delivers another outstanding performance from the heart that breathes new life into the film. That being said, her performance was the real highlight of an otherwise lackluster film.

Its main issue is that it doesn’t do enough to differentiate itself from the previous adaptation. Sure, it’s got a new coat of paint with flashier cinematography, but the visuals looking good doesn’t automatically make the film good. Plus, Spielberg’s overuse of lens flare is so distracting it would make even J.J. Abrams think twice. The lighting can be all over the place too. It’s especially distracting in the scene where Tony and Maria are in a church in front of a stained glass window where the lighting inexplicably changes color for no apparent reason other than because it looks cool. While that may be true for individual frames, it makes the scene as a whole just bizarre. The choreography is good but I couldn’t help but think “Why did this movie need to be made?” during most moments of the film. Everything feels all too similar to the original, and Spielberg’s version adds little to the conversation. What few story changes there are of little consequence because the greater strokes remain the same. It was awkward in the original when Maria sleeps with Tony right after he killed her brother Bernardo in the original, and it’s still awkward here. The story follows the same beats so everything always ends up the same.

Newcomer Rachel Zegler is a fine Maria with a great singing voice while Ansel Elgort has a decent voice but simply doesn’t have the chemistry with Zegler to deliver the captivating love story at the heart of the film. The passion just isn’t there. Ariana DeBose delivers a breakout performance in the same role that won Rita Moreno her Oscar as Anita, although it’s not enough to carry the whole film. And nor should it.

What West Side Story does do is remind audiences how great the source material is. It proves that Arthur Laurents’ story, Leonard Bernstein’s music, and Stephen Sondheim’s lyrics are timeless no matter what context they’re presented in. Spielberg does a decent enough job to make it look pretty for a new generation, but West Side Story is nothing special. In a year that has had solid musicals throughout, it’s unfortunate that West Side Story ends things on more of a low note.

What West Side Story does do is remind audiences how great the source material is. It proves that Arthur Laurents’ story, Leonard Bernstein’s music, and Stephen Sondheim’s lyrics are timeless no matter what context they’re presented in. Spielberg does a decent enough job to make it look pretty for a new generation, but West Side Story is nothing special.