Home » Blogs » ‘Last Night in Soho’ Review: Unlike Any Other Edgar Wright Film 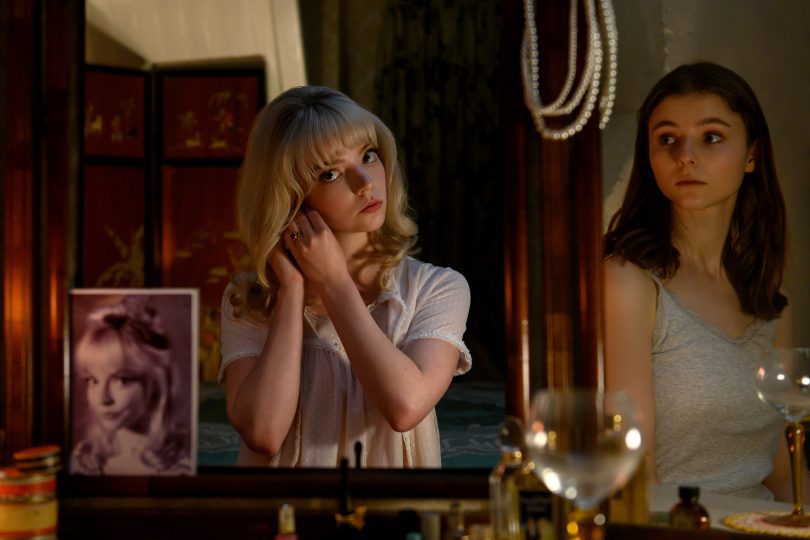 Last Night in Soho is directed by Edgar Wright, but it’s perhaps the biggest departure from his style of filmmaking he’s ever done. He’s never been one to stick to a single genre, whether it’s with his western debut A Fistful of Fingers, the zombie comedy Shaun of the Dead, or the rhythmic action heist Baby Driver. Something all of his films have in common though is quick-witted humor and a killer soundtrack. Last Night in Soho however, forgoes all humor and goes hard into psychological horror, delivering a tantalizing story that’ll have you screaming more than laughing. It still has a killer soundtrack and plenty of Wright’s other hallmark flourishes, making Last Night in Soho a film you won’t want to miss.

Ellie Turner (Thomasin McKenzie) is a young and driven woman with a keen eye for fashion who gets accepted into a prestigious fashion school in the heart of London. Great style isn’t the only thing she can see as she often catches glimpses of her dead mother in mirrors, watching over her. Initially she’s excited to get away from her small town and experience the city life of London, but the sights and sounds and people prove to be a bit overwhelming for Ellie. Worst of all, every time she falls asleep in her room, she dreams of Sadie (Anya Taylor-Joy) a socialite from the 1960’s who’s trying to make it in London as a singer. There’s something strange to her dreams though, because not only do they feel real but she also starts seeing elements from them match up in the real world. As the dreams start to get darker and more intense, Ellie learns of Sadie’s horrifying past that has come to warn her.

Last Night in Soho is essentially two films, one that takes place back in the 1960s and one in present day, that occasionally intersect and cross paths with one another. Edgar Wright does a fantastic job at blending the two worlds together, mostly through the use of mirrors. When Ellie steps into Sadie’s shoes, she is literally doing so. Reflections, whether in mirrors or windows, give a glimpse into Ellie’s reactions to Sadie’s activities. At the beginning, Sadie is who Ellie strives to be; she’s charming, confident, beautiful, and seems to know what she wants and goes after it. Ellie dyes and cuts her hair like Sadie, and then starts wearing the same clothing style as her. It’s uncanny how similar Thomasin McKenzie and Anya Taylor-Joy are able to look. There are a few scenes where you can’t help but question who you’re watching; Ellie or Sadie. Wright does a great job at blending the two periods and switching things up to always keep you on your toes.

Wright’s use of colors, particularly neon blue and red, electrify the screen. Ellie gets an apartment with a bright flashing neon sign right out the window. The hum of the bulbs is ever present, as is the eerie red, blue, and white shadows that are constantly casted into her room. Last Night in Soho never lets your eye rest. There’s always some devilish little detail to take in as your eyes scan every inch of the frame. Nothing lasts for too long, and there are plenty of blink-or-you’ll-miss-it moments. The tension is always building as Ellie and Sadie’s lives merge closer and closer together and the dark shadows get bigger and bigger.

The film isn’t Wright’s best, however, as Last Night in Soho struggles in its third act as it brings everything together and wraps the story up. Without going into spoilers, the film attempts to have its cake and eat it too by covering all its bases with its reveals. It attempts to blur the lines between who are the victims and villains, delivering scenes that try to show you both sides of the story and leave things a little too open to interpretation. It eventually lands on the best possible outcome, but the path it took to get there was overly convoluted and tiring. Everything else was fine leading up to it, but it perhaps went just a little too far in the end.

Last Night in Soho is unlike any other film Edgar Wright has done, and it’s great to see him branch out into more creative avenues. His sharp editing, stylish cuts, and perfectly placed score are all present too. Not everything works, but the majority of the film delivers a dark and twisted reflection of society that will surely make you dream just a little bit differently next time you go to sleep.

Not everything works, but the majority of the film delivers a dark and twisted reflection of society that will surely make you dream just a little bit differently next time you go to sleep.