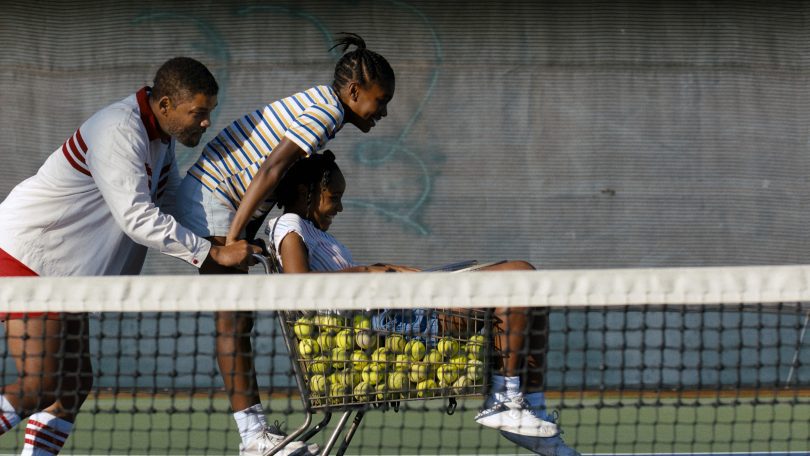 When you think of the sport of tennis, Venus and Serena Williams are two of the names that immediately come to mind. The sisters dominated the sport for decades and are among the greatest athletes of all time. Before the entire tennis world had their back, there was one man who always knew they were going to be the best; their father Richard, because he had a plan since before they were born. King Richard explores the early years of the Williams family and the determination of Richard to have his daughters succeed no matter the cost.

Richard Williams (Will Smith) laid out an entire plan for his two newborn daughters, Venus and Serena, in which they would become the Michael Jordan’s of tennis. Everything, from when they would practice to when they would get a professional coach to when they would start in tournaments was all part of his perfect plan. Is Richard a genius or a psychopath? King Richard dives into his perseverance to make his daughters the best in the world. The interesting thing about the film is that in hindsight, he was right. Venus Williams was #1 in the world and Serena would go on to be the GOAT. The film perhaps gives a little too much credit to Richard, who attributes every success to himself because it was a part of his master plan, meanwhile every failure is because it was outside of his plan.

Still, you have to hand it to Richard’s confidence in his daughters, played by the talented Saniyya Sidney and Demi Singleton. The film absolutely nails the early life of the Williams sisters, from their mannerisms down to their clothing and style. King Richard does its best to capture in remarkable detail growing up in the 90s, going so far as to recreate home videos shot by Richard. I’m not the biggest tennis fan, but the story of Venus and Serena Williams will appeal to everyone of all ages.

The film mostly focuses on Venus, who was the first to turn pro and carve a name for the family. It starts off rather innocently, with the girls learning everything from Richard at a local court in Compton. Rain or shine, the girls train hard but they always have a smile on their face. At the beginning, it seems like they’re just having fun. Of course it’s Richard who is always pushing them to be better and do better. It’s his plan, afterall. He’s the one who’s sweeping the leaves off the court or taking a night shift at work so he can train them in the afternoons. It’s all because he knows they can be the best in the world and everything he does is so that others will too.

It does make me wonder about the rest of the family. Venus and Serena have three other sisters who go largely ignored. Everything they do is in support of their sisters’ tennis talents. Same goes for his wife, Oracene (Aunjanue Ellis). There is an emotional moment in the film where she is pushed to her limits and confronts Richard with his obsession with his plan. Despite all his success, Richard was not always a great husband and father. Looking back, we can see how his plan and pushing ultimately worked out in the end, but most of the decisions he makes are completely up to chance and downright luck sometimes. The film is a little too neat and perfect in their rise to stardom. For every Venus and Serena, there are probably thousands of other talented athletes who crash and burn and never make it to that level of fame. To put all the credit onto Richard’s plan feels a bit selfish, especially when there are so many others involved.

Ultimately King Richard is a thrilling biographical drama into the early lives of Venus and Serena Williams as shaped by their father. It often feels very by-the-book for the genre, but that doesn’t make it any less exciting or thrilling. Whether you’re a tennis fan or not, it’s impossible to not be captivated by the Williams sisters.

Ultimately King Richard is a thrilling biographical drama into the early lives of Venus and Serena Williams as shaped by their father. It often feels very by-the-book for the genre, but that doesn’t make it any less exciting or thrilling.