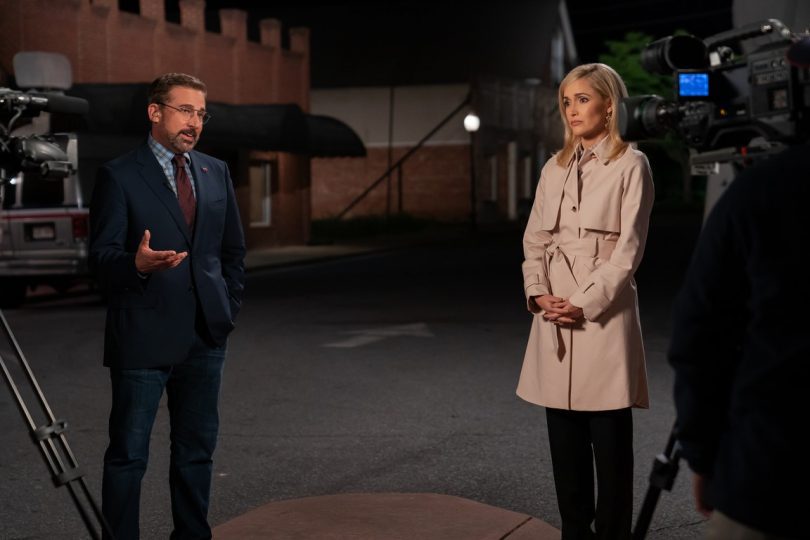 Now may or may not be the perfect time for a political comedy depending on who you ask. Things are tense and ridiculous enough in our current society so is it necessary to see it in film where we often go to briefly get away from that stress? But on the other hand, it’s also extremely timely and, if done correctly, can make a stand with its message. Jon Stewart has never been one to shy away from saying what’s on his mind, and Irresistible is his way of showing just how messed up our political system is. It’s a film that has a lot to say, and while it does feel like it’s pulling its punches at times, it still delivers a poignant political comedy with quite the bite.

Gary Zimmer (Steve Carell) worked as a political strategist for Hillary Clinton during the 2016 presidential election and we all know how that turned out. Trying to move on from the biggest embarrassment of his life, he sees a viral video of Marine Colonel Jack Hastings (Chris Cooper) giving a passionate speech in favor of immigrants during a meeting in a small right-wing Wisconsin town. Gary decides that he can turn Jack into a Democratic powerhouse and win back the Heartland in a bid for mayor. But when the rest of the political world gets news of what’s going on, his rival Faith (Rose Byrne) joins the fight and works to keep the Republican mayor in power. What was originally a small skirmish in a no-name town, soon becomes ground zero of a political warzone.

At the heart of Irresistible is understanding. No one understands each other and that’s what causes the majority of the conflict and humor in the film. Democrats don’t understand Republicans. Big town people like Gary don’t understand small town people like Jack. Gary’s first interaction with someone when he arrives is to go into a German styled bar and order a Budweiser and burger, because that’s what he thinks will connect with these people. Being a nice guy, instead of saying they don’t serve that, the bartender goes across the street to buy a six-pack and burger from somewhere else. There’s such a great disconnect with everyone that you can’t help but laugh.

Stewart also likes to point out that everyone is just in it for themselves. Gary really doesn’t care about some small town in Wisconsin or if Jack becomes mayor. He just wants to beat Faith and win and vice versa. Everybody has their own motives. That’s how politics works. Nobody truly cares about the “little guy;” it’s just about the big people in charge on both sides of the fence. They want the power, and often aren’t too interested in actually fixing things.

Irresistible also takes a dig at the media towards the end of the film and that is where things start to feel a little overcrowded. The idea is solid, but it comes too late in the game to actually explore. Instead the film just does this whole “oh, and by the way…” thing that leaves a lot of discussion up in the air. It takes an interesting turn, but then wastes any opportunity it might have created.

Irresistible may not be the knockout punch we come to expect from Jon Stewart, but it’s still a solid and sharp political comedy that has a lot to say. It may just feel a little dull just because nothing can match the madness that is our current political climate. There’s nothing Hollywood can do to match that, I’m afraid.

Written and directed by Jon Stewart, Irresistible is a comedy about what happens when a small Wisconsin town becomes the main attraction of our political circus. After the Democrat’s top strategist Gary (Steve Carell) sees a video of a retired Marine Colonel (Chris Cooper) standing up for the rights of his town’s undocumented workers, Gary believes he has found the key to winning back the Heartland. However, when the Republicans counter him by sending in his brilliant nemesis Faith (Rose Byrne), what started out as a local race quickly becomes an out-of-control and hilarious fight for the soul of America.