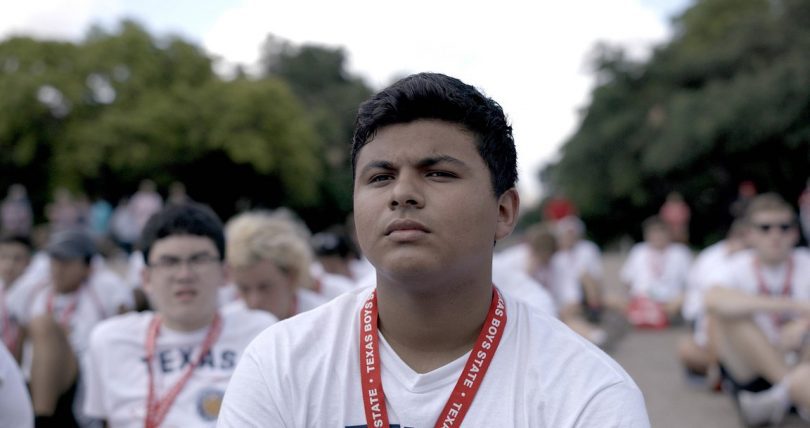 Given the current political climate of the country, I was initially a bit weary to watch a documentary that follows a group of teenage boys as they build an entire representative government from scratch within a week. Real life is already exhausting enough at the moment. And yet from the beginning, Boys State draws you in with its potential. Can kids work together to create a better governing system than adults? Or is the end result the same no matter who is put in charge? Regardless of your political stance, Boys State remains a fascinating watch.

Every year, selected teenage boys and girls come together to participate in a mock representative government where they must build their own governing body from the ground up and nominate their fellow students for roles, with governor being the highest office. Boys State highlights the 2018 Texas competition and follows a handful of captivating and enthusiastic students as they all strive to achieve their goals within the competition. For some that means being elected governor, while others are happy with lesser but equally important roles.

Having never heard of Boys/Girls State before the documentary. It was interesting to watch and learn about the competition itself. I couldn’t help but be curious to see if teenagers would be able to actually get anything done. Yes, they’re all rather intelligent and have an interest in politics, but at the same time they’re still teenagers who are left to their own devices. It’s especially evident when they’re trying to get laws passed.

The film does a good job at representing political ideas from all across the spectrum. Teens are randomly assigned to one of two parties; Federalists and Nationalists. From there, each party must come up with their own ideologies and talking points. On the Federalist side there’s Ben, who got elected as the party chair, and is willing to do whatever it takes to get the people on his side elected. Opposite him is Steven, an underdog who stands firm with his beliefs and believes that can win him the governor’s chair, even if he’s not the loudest in the room.

What’s interesting about the film is how timely and reflective of our current government system it can be. Yes, these are teenagers building everything from scratch at a ridiculous fast paced but the parallels couldn’t be any clearer. Topics like gun control and pro-life are discussed, and shady election antics are on full display. Like any real government, they may or may not make you angry. It’s fascinating how the longer the week goes on, the more and more their government starts to mirror our own.

Boys State unfortunately doesn’t offer up any insight into all of this, instead just showing things for how they are and letting the boys do all the talking and discussing themselves. Viewers are left to make up their own decisions and insight on the competition. It’s a timely documentary that provides a look into the governing process and how people are able to shape it. Personally I would be interested in seeing a Girls State sequel that follows the girls who are doing the same thing. I wonder if they would fare any better? Still, don’t be surprised if we see the teenagers featured in the film show up again in a couple of years in politics. Like their newly established government, this is just the beginning for them.

Boys State is a political coming-of-age story, examining the health of American democracy through an unusual experiment: a thousand 17-year-old boys from across Texas gather together to build a representative government from the ground up. High-minded ideals collide with low-down dirty tricks as four boys of diverse backgrounds and political views navigate the challenges of organizing political parties, shaping consensus, and campaigning for the highest office at Texas Boys State–governor.